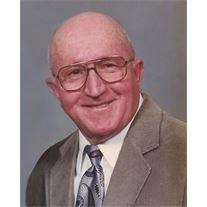 Wallace Robert Schulte, 85, Almont, died October 30, 2013 at Elm Crest Manor, New Salem.
Mass of Christian burial will be held at 10:30 am on Monday, November 4, 2013 at St Pius V Catholic Church, New Salem, with Rev. Selva Periannan as celebrant. Burial will be at St. Pius Cemetery with full military honors.
Visitation will be held from 3 to 4 pm on Sunday, November 3, 2013 at Elm Crest Manor and continue from 5-7 pm at the church with a vigil service at 7 pm. Visitation will continue one hour prior to the service at the church on Monday.
Wallace was born March 17, 1928 in Hannover, North Dakota, son of Carl and Anna (Rabe) Schulte. He attended a country school that burned down, so he finished grade school in the teacher’s private home. His first job was as a farm hand for Ray Sorensen, followed by employment at Laurence Reinke’s farm. Wally worked for REA from 1946 until 1949, when he enlisted in the United States Army, serving from January 1949 until January 1950. He was recalled by the US Army in October 1950 during the Korean War, serving for one more year. His service included the military police and he was discharged at the rank of Corporal. Wally was united in marriage on March 5, 1950 to Veronica “Ronnie” Mathilda Erhardt, daughter of Kasper and Lokraze (Messer) Erhardt. Wally and Ronnie resided in Junction City, Kansas for a year after Wally’s discharge from the Army. They returned to Center where Wally drove gas truck and then worked on the construction of the Garrison Dam. In the fall of 1954 they purchased a gas station that was destroyed by fire in December 1955. Wally then worked for Albert Steffenson until April 1956 when he moved his family to New Salem. Wally took classes at Bismarck Junior College (now Bismarck State College) that enabled his employment as an Engineering Technician with the ND Highway Department starting in 1956. In 1970, Wally and Ronnie built a new home in New Salem. Wally retired from the ND Highway Dept. in the spring of 1992. To fill his retirement days, he helped out at the old family farm north of Center and on Deb (Doug’s) farm east of New Salem.
The Schulte name was always associated with baseball and softball. Wally and his four brothers were described as “dynamite” on the ball diamond. The boys played on the Center team, and Wally, along with his brother Delmer, also played on the Hannover team. He also had the opportunity to play ball while in the Army. In tribute to the five Schulte brothers, they will have personalized seats next to each other at the new Bismarck Memorial Ballpark grandstand.
Wallace was faithfully involved with the New Salem Fire Department for many years. In 2011 he received a 50 year member award from the New Salem American Legion. While residing in Almont, he was active in the Almont Commercial Club. His special talent was woodworking and he volunteered numerous hours on woodworking and other projects for St. Pius Church as well as building numerous items for family members. After retirement, Wally enjoyed fishing with family and friends, traveling with his siblings, and attending numerous sports activities involving his children, grandchildren, and great grandchildren. Veronica passed away on May 20, 1995. A highlight that holds special memories and fulfilled a lifelong dream of Ronnie’s was Wally coaching the “This One’s for You” softball team, comprised of their daughters and granddaughters, in the Sam McQuade Charity Softball tournament in June 1995. Wally married Audrey (Ritz) Striegel on October 29, 2003 and they made their home in Almont. Audrey passed away June 10, 2006. Wally continued to live in Almont until January of 2013 when he became a resident at Elm Crest Manor.
Wally will be deeply missed by his children, Patricia Gedak, Deberra (Doug) Doll, Dean Rogers, Brenda (Gary) Doll, Tina (Mitch) Kuntz, Karen (Lynn) Roesler, Janelle Schulte, Amy Schulte, Wade (Terry) Schulte, and Chad (LeeAnne) Schulte; his grandchildren, Brian (Dawn) Benson, Becky (Shannon) Lemar, Wendy (Scott) Wittenberg, Danielle (Rob) Borseth, Joshua (Jessica) Shores, Lauren (Joshua) Calkins, Micky (Jamie) Doll, Jill Doll, Trudy (Ryan) Kemnitz, Mark Kuntz, Emily, Laura and Kyle Roesler, Jennifer Castner, Terence West, and Kayla, Tyler and Jillianna Schulte, and several step grandchildren; great grandchildren, Jessica and Rya Benson, Macie and Preston Lemar, Malee and Cameron Wittenberg, Rawling Borseth, Titus and Grant Shores, Asher and Arianna Calkins, Payton and Aubrey Doll, Jocelyn and Brynn Kautzman, Quinn Kemnitz, Lexie Castner, and several step great grandchildren; his sisters, Delores Van Brocklin and Ellen Lange; his brothers in-law and sisters in-law, Margaret (George) Wetsch, Matt (Josephine) Erhardt, Jack (Esther) Erhardt, Vivian Erhardt, Kasper (Linda) Erhardt, Shirley Erhardt, and Lucretia (Chris) Silbernagel. He will also be missed by his many nieces and nephews.
Wally was preceded in death by his wives, Veronica and Audrey; his parents; brothers, Gordon, Ervin, Kenneth, and Delmer; sister, Dorene (Reuben) Henke; daughters, Wanda and Virginia; son, John; son-in-law, Ray; and grandsons, Thomas, Geoffrey, and Matthew; brothers-in-law and sisters in-law, Richard Van Brocklin, Eddie Lange, Mike and Eva Erhardt, Matt and Rose Barth, Connie Erhardt, and Ray Erhardt.
In lieu of flowers the family prefers memorials to Elm Crest Manor.
To order memorial trees or send flowers to the family in memory of Wally Schulte, please visit our flower store.