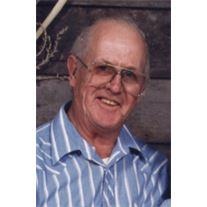 Viran Rusch, 79, New Salem, died July 14, 2012 at Missouri Slope Lutheran Care Center, Bismarck.
A funeral service will be held at 10:00 am on Friday, July 20, 2012 at Zion Lutheran Church, New Salem, with Reverend Les Wolfgram officiating. Burial will be at Graceland Cemetery, New Salem.
Visitation will be from 3 to 8 pm on Thursday, July 19, 2012 at the Buehler-Larson Funeral Chapel, New Salem, with a prayer service at 7:00 pm. Visitation will continue one hour prior to the service at the church on Friday.
Viran was born May 22, 1933 in New Salem to Robert and Ella (Rabe) Rusch. He attended school through the eighth grade. Learning about hard work and a strong work ethic from a young age, Viran farmed with his parents until going to work at the Farmers Elevator in New Salem. He enlisted in the US Army in August 1953 and served in Korea. He was honorably discharged in November 1955. On October 3, 1957 Viran married Delores Wittmayer in Hazen. They made their home in New Salem and Viran continued working at the Farmers Elevator until his retirement in 1995. Viran enjoyed playing cards and watching tv. He was a member of the New Salem American Legion.
Blessed to have shared his life is one daughter, Rynell Rusch, Bismarck; three sons, Randy (Connie) Rusch, Alpine, CO, Ryan Rusch, and Rocklyn Rusch, both of New Salem; and three brothers, Roger (Marlene) Rusch, Seattle, WA, Robert (Carolyn) Rusch, Seattle, WA, and Clinton (Jeanette) Rusch, Mandan.
Viran was preceded in death by his parents; wife, Delores, in 2004; brother, Dennis Rusch; and sister-in-law, Verona Mittelstedt.
To order memorial trees or send flowers to the family in memory of Viran Rusch, please visit our flower store.