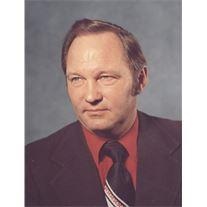 Victor Kenneth Borchelt, 82, New Salem, died April 14, 2012 at Medcenter One Mandan Living Center with his family by his side.
A funeral service will be held at 10:30 am on Thursday, April 19, 2012 at Zion Lutheran Church, New Salem, with Reverend Timothy Jenks officiating. Visitation will be held from 4 to 8 pm on Wednesday at the Buehler-Larson Funeral Chapel in New Salem and continue one hour prior to the service at the church on Thursday.
Victor was born July 2, 1929 on the family farm in New Salem to Charles and Norma (Burgdorf) Borchelt. He was raised and educated in New Salem where he worked on the farm 2 miles west of New Salem. On October 3, 1953 he married Audrey Anderson of Almont and they had four children together. He was married to Marilyn Rudasill of Missouri from 1969 to 1973. Victor married Gloria Jean Smith of Metropolis, IL on October 15, 1975.
Victor enjoyed many years farming with his son Ron until his health declined. He entered the Medcenter One Living Center in September 2007 after his second stroke which no longer allowed him to live in the farm.
Victor is survived by his wife, Gloria Borchelt, New Salem; four children, Laurie (Doug) Blakley, Helena, MT, Zandra Sutton, Bouse, AZ, Sheila Sorlie, Bozeman, MT, and Ron (Janelle) Borchelt, Bismarck; one brother, Martin (Margaret) Borchelt, Waterloo, IA; one sister, Florence (Juel) Skytland, Bismarck; six grandchildren, Colin (Katie) Blakley, Wyoming, MN, Dustin (Jess), Dallas, David, and Jessica Borchelt, all of Bismarck, and Lander Sorlie, Bozeman, MT; and four great grandchildren, Noah Borchelt and Bennett, Charlie, and Max Blakley.
Victor was preceded in death by his parents and his second wife, Marilyn.
To order memorial trees or send flowers to the family in memory of Victor Borchelt, please visit our flower store.