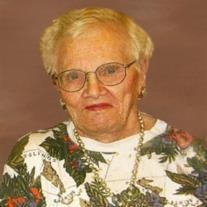 A funeral service will be held at 10:30 am on Friday, March 6, 2015 at the Buehler-Larson Funeral Chapel in New Salem with Chaplain Burnie Kunz officiating. Burial will be at Bethel Cemetery in rural New Salem.

Visitation will be held from 1 to 2 pm on Thursday, March 5 at Elm Crest Manor, New Salem, and continue one hour prior to the service at the chapel on Friday.

Verna was born April 12, 1920 in Mandan to Louis and Hattie Scheerle. She grew up on her family farm south of Judson and attended school through the eighth grade. On October 15, 1939 she married Theodore “Ted” Giese in New Salem. They lived on Verna’s family farm for some time, later renting a farmstead from Ted’s aunt. They returned to the Scheerle farmstead which they purchased and raised their family, farmed, and ranched until their retirement. Verna loved gardening and tending to her flowers. Every Saturday she baked bread for her family. A kind and faithful woman, she was a lifetime member of Bethel Church.

Blessed to have shared her life are two sons, Vernon and Robert Giese, both of Bismarck; 8 grandchildren; 4 great grandchildren; and two sisters, Lorena Ereth, Mandan and Erna Weigel, New Salem.

Verna was preceded in death by her parents; her husband of nearly 73 years in 2012; daughter, LaVonne Becher; and sisters, Delora Pfleger and Ina Scheerle.

Memorials are preferred to Elm Crest Manor in New Salem.
To order memorial trees or send flowers to the family in memory of Verna Giese, please visit our flower store.