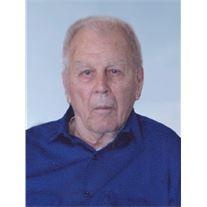 Theodore “Ted” Giese, 96, New Salem, died September 3, 2012 at Elm Crest Manor with his beloved wife of nearly 73 years by his side.
A funeral service will be held at 10:30 am on Friday, September 7, 2012 at Bethel United Church of Christ Church, rural New Salem, with Chaplain Burnie Kunz officiating. Burial will be at Bethel Cemetery.
Visitation will be held from 1:30 to 2:30 pm on Thursday, September 6, 2012 at Elm Crest Manor and continue from 3 to 7 pm at the Buehler-Larson Funeral Chapel in New Salem and one hour prior to the service at the church on Friday.
Ted was born March 18, 1916 at his family home south of New Salem to Phillip and Erma Giese. He attended school through the eighth grade and on October 15, 1939 married Verna Scheerle in New Salem. They lived on Verna’s family farm for some time, later renting a farmstead from Ted’s aunt. They returned to the Scheerle farmstead which they purchased and raised their family, farmed, and ranched until their retirement. Ted was a farmer at heart and loved all of the hard work that came with it. He also helped Verna with gardening and cooking. Ted always made sure their guests were well fed and just wanted to “let ‘em eat”. His faith was very important to him and he was a lifelong member of Bethel Church.
Blessed to have shared his life is his wife, Verna, Elm Crest Manor, New Salem; two sons, Vernon and Robert (Gloria), all of Bismarck; eight grandchildren; four great grandchildren; son-in-law, Delmar Becher, Glen Ullin; and two brothers, Clifford (Peggy), MN and Archie, New Salem.
Ted was preceded in death by his parents; a daughter, LaVonne Becher; daughter-in-law, Carmen Giese; brother, Clarence (LaVerne) Giese; and sister-in-law, Hildegard Giese.
Memorials are preferred to Elm Crest Manor or the donor’s choice.
To order memorial trees or send flowers to the family in memory of Theodore Giese, please visit our flower store.