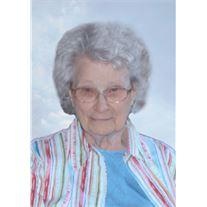 Sylvia Schmitz, 93, Bismarck, died April 14, 2012 at St. Gabriel’s Community, Bismarck.
A funeral service will be held at 2:00 pm on Thursday, April 19, 2012 at First United Methodist Church, Mandan, with Reverend Steve C. Johnson officiating. Burial will be at Mandan Union Cemetery.
Visitation will be held from 1 to 2 pm on Wednesday, April 18, 2012 at St. Gabriel’s Community, Bismarck, with a prayer service at 1:30 pm. Visitation will continue one hour prior to the service at the church on Thursday.
Sylvia was born February 21, 1919 in Philip, SD to John and Bertha (Hanson) Peterson. She was raised and educated in Luc, WI and attended high school in Fredrick, WI. Sylvia attended River Falls State Teachers College in Wisconsin and received her teaching degree. In 1941 she married Albert Bliese and they moved to ND. She taught school in rural St. Anthony and Huff. She continued her education at the University of Mary in Bismarck. On June 25, 1968 she married Louis A. Schmitz in Mandan. Sylvia retired from teaching in 1971 and then worked as a part time librarian at Morton County Library for ten years. Sylvia was a member of First United Methodist Church in Mandan, United Methodist Women, and Cup of Friendship.
She is survived by one niece, June Meyers, St. Paul, MN.
Sylvia was preceded in death by both of her husbands; her parents; two sisters, Marian Johnson and Daisey Burley.
To order memorial trees or send flowers to the family in memory of Sylvia Schmitz, please visit our flower store.