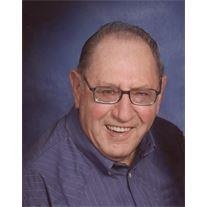 Stephen “Steve” Beehler, 78, Mandan, died October 16, 2013 at Sanford Off Collins, Mandan, with his loving family by his side.
Mass of Christian burial will be held at 10:30 am on Monday, October 21 at St. Joseph Catholic Church, Mandan, with Monsignor Patrick Schumacher celebrating. Burial will be at the North Dakota Veterans Cemetery with full military honors.
Visitation will be held from 3 to 7 pm on Sunday, October 20 at St. Joseph Catholic Church Mandan, with a Moose Ritual at 4:30 pm followed by a Parish Vigil/ Rosary at 5 pm. Visitation will continue one hour prior to the service at the church on Monday.
Steve was born November 10, 1934 in Mandan to Stephen and Katherine (Schmidt) Beehler. Raised and educated in Mandan, Steve then served in the US Air Force from 1953 to 1957. Returning home to Mandan, Steve met his future wife Leona Schmidt at a country dance and they were married on June 17, 1957 and continued to participate in their love of dancing for the next 56 years. In the early 50’s Steve began his career at Bill’s Super Valu and worked in various positions over the next 43 years before retiring in 1997 as Grocery Manager. He and Leona enjoyed traveling for many years, taking numerous bus tours to all parts of the country. They also enjoyed camping with their family and friends and Steve used every chance he had to go fishing. Always up for a hand of cards, he won many games of pinochle, gin rummy and cribbage. Active in the community, Steve was a 50 year member of the Legion and Eagles Clubs and was the Eagles Dakotas President of the Year in 1974. He was also a Moose Club member and very active in the Kiwanis Club where he served as President and was named Kiwanian of the year numerous times. He was very active in all fund raising and community service events. In 2007, Steve and Leona were named Mandan Golden Age King and Queen.
Family was most important to Steve and he was never happier than when he got a chance to spend time with all of his grandchildren and was most proud when attending their events. He was very thankful to those who visited and cared for him through his final days and enjoyed reminiscing with friends and relatives during his hospital stay.
Blessed to have shared his life with his wife of 56 years, Leona; he is also survived by three sons, George Beehler, Mandan, Doug (Stevie) Beehler, Eagle, ID, and Dave (Ellen) Beehler, Eagan, MN; daughter, Brenda (Jerry) Schaff, Mandan; grandchildren, Amanda (Donny) Fisher, Clayton and Brent Schaff, Kayla, Jace, and Matt Beehler, Candace Freeman; great grandsons, Talon and Hunter Freeman; sister, Tillie (Denny) Connelly, Sealy, TX; brother-in-law, Tom Helbling, Minnesota; Leona’s family, Eleanor (John) Aman, Mandan, Beatrice (Ron) Deuel, Indiana, Linda Strandemo, Bismarck, Jim (Isabel) Schmidt, Bismarck, Robert (Shirley) Schmidt, Texas, Kathy (Dennis) Thomas, Montana, Nancy (Bruce) Schmidt, Bismarck, and Eugene (Pam) Schmidt, Bismarck; special friend, Lee Kuntz and many nieces, nephews, cousins, and countless friends to whom he was known as “Smiling Steve.”
Steve was preceded in death by his parents; stepdad, Nick Simon; in laws, George and Maggie (Heinert) Schmidt; one sister, Betty Helbling; two brothers, Frank and Adam Beehler; sister in law, Irene Beehler and two brothers-in-law, Garry Strandemo and Eugene Thomas; nephew, Brian Helbing and great nephew, Justin Heltemes.
In lieu of flowers, the family asks that you send a donation on Steve’s behalf to the American Cancer Society for Merkel Cell Carcinoma Research.
To order memorial trees or send flowers to the family in memory of Steve Beehler, please visit our flower store.