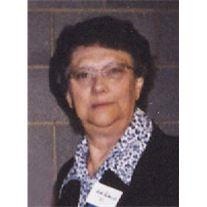 Ruth Schrenk, 74, Mandan, formerly of Baldwin, died October 10, 2011 at Marion Manor Health Care Center, Glen Ullin.
A Funeral Service will be held at 2:30 pm on Friday, October 14, 2011 at the Seventh Day Adventist Church, Mandan, with Reverend Darrell Lindensmith officiating. Burial will be at the Baldwin Cemetery.
Visitation will be held from 3 to 8 pm on Thursday, October 13 at Buehler-Larson Funeral Home, Mandan, and continue one hour prior to the service at the church on Friday.
Ruth was born March 27, 1937 in Bismarck to Rudolph and Barbara (Wiebe) Schrenk. The second youngest of six children, she attended grade school in Baldwin and graduated from Sheyenne River Academy in Harvey, in 1957. In 1958 Ruth moved to Denver, CO to work at Porter Memorial Hospital. While there, she took the Licensed Practical Nurse course, later working at Hinsdale Hospital, in Hinsdale, IL. After a number of years, when her parents needed help, she moved back to Baldwin and worked in the nursing profession there. She later gave herself full time to lovingly care for her parents until they passed away, after which she worked in the nursing home until her retirement.
Ruth had many interests through the years. She liked to cook and prepare for family gatherings, she greatly enjoyed her nephews and nieces, loved to crochet, and was a perfectionist. Ruth enjoyed gardening and sewing. During her working years she enjoyed traveling to visit historical places. She liked to read and sing and would, upon the frequent requests of her family, sing her sweet rendition of “Mockingbird Hill”. This will always be a fond memory for those close to her. Ruth had a deep and abiding faith in her lord.
Left to mourn her passing are three sisters, Helen Gussner and Betty Belmont, both of Mandan, and Winona (Emil) Rodacker, Jamestown; brother, Alfred (Evey) Schrenk, Bowden, ND; and her nieces and nephews.
Ruth was preceded in death by her parents; brother, Don; and two brothers-in-law, Otto Gussner, and Bob Belmont.
To order memorial trees or send flowers to the family in memory of Ruth Schrenk, please visit our flower store.