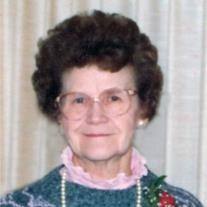 A celebration of her life will be held on Saturday, April 30, 2016 at 11:00 CDT at the ALC / UCC Church in Flasher. The family will greet friends one hour prior to the service at the church. Burial will be at Fairhill Cemetery.

Ruth was born May 1, 1923 on the family farm north of New Leipzig to Jacob and Bertha (Buchwitz) Pahl. She graduated from New Leipzig High School and attended college in Yankton, SD, where she received her Teacher’s Certificate. While teaching school in Raleigh, ND, she met Wayne Christensen and they were married on October 21, 1948 at the New Leipzig Congregational Church. They lived on the family farm west of Raleigh and raised two children. In 1960 they moved to a house in Raleigh while continuing to farm.

Ruth loved gardening and spent many hours working in her yard which was always filled with beautiful flowers. She was also known for her cooking and baking skills. She was a member of the Raleigh Homemakers and the Flasher U.C.C. Women’s Fellowship. Ruth enjoyed bowling and belonged to both an evening Women’s League and an afternoon league called the Coffee Cup.

In 1990 Ruth and Wayne retired to Flasher. Ruth continued to enjoy tending the flowers in her yard while Wayne helped his son with the farming operation. She enjoyed winter trips to Arizona to visit with her daughter, son-in-law, and grandkids. Her greatest joy was spending time with her family and many friends.

In 2000 Ruth suffered a stroke but she was able to spend many years living in her home with the help of many dear caregivers.

Ruth was preceded in death by her parents, Jacob and Bertha Pahl; her husband, Wayne Christensen in 1996; her sister, Mildred; her brothers, Ernest, Fred, Melvin, Roland, Edmund, and Elmer; her sisters-in-law, Cora (Reg) Reetz and Doris (Gary) Hayden; her brothers-in-law; Herb Zimmerman, Dave Luchsinger, Otto Deeg, and Vernon Christensen.
To order memorial trees or send flowers to the family in memory of Ruth Christensen, please visit our flower store.