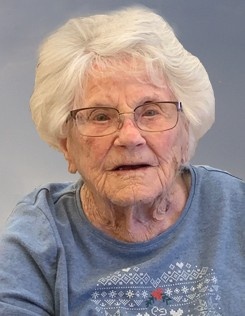 Ruby Mae Norton, age 101, passed away peacefully on April 3, 2020 at Elm Crest Manor in New Salem with family at her side.

A memorial service will be held at a later date.

Ruby was born November 6, 1918 at the family farm near Raleigh, ND to Theodore and Estella (Packard) Christensen.  She attended and graduated from Raleigh High School and Dickinson State Teachers College where she earned a degree in education.  Ruby taught in rural schools in Morton County 1940 when she married her soul mate, Dallas Norton of New Salem.  They were wed on June 1, 1940 and moved to an abandoned farmstead southeast of New Salem where they started their life together.  They raised their three sons, Gary, Curtis, and Clark on their dairy and later, beef operation until they retired in 1984.

In 1987 they moved to New Salem and enjoyed the fruits of retirement.  Ruby accompanied Dallas in working with the Gideon’s and Steer Inc.  She had been active in Homemakers Club and Women’s Guild.  Dallas and Ruby moved into Elm Crest Manor in 2010.

Ruby loved to crochet!  She made blankets for all of her children, grandchildren, and some of her great grandchildren too!  She also made kitchen towels to hang on the stove.  She had quite a business going from her Elm Crest room.  Ruby had a very sharp mind and continued to master crossword puzzles until her final days.  She loved to read books and enjoyed playing any kind of game, and she didn’t like to lose either.  Ruby was always deeply devoted to her faith and to her family.

She was preceded in death by Dallas, her husband of nearly 76 years; her parents; sisters, Cora and Doris; brothers, Wayne and Vernon; all her sisters-in-law and brothers-in-law; and one grandson, Turner Norton.

To order memorial trees or send flowers to the family in memory of Ruby Norton, please visit our flower store.