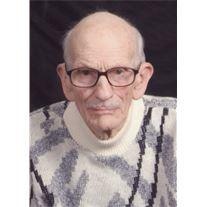 Robert P. Perschke, 85, Center died March 24, 2014 at Sanford Health, Bismarck.
Mass of Christian burial will be held at 11:00 am CDT on Saturday, March 29 at St. Martin's Catholic Church, Center, with Reverend Periannan Selva celebrating. Burial will be at Center Community Cemetery with full military honors.
Visitation will be held from 5 to 7 pm on Friday at the church with a parish rosary at 7 pm. Visitation will continue one hour prior to the service at the church on Saturday.
Robert was born September 10, 1928 in Mandan to Paul and Stella (Lytle) Perschke. He attended the Bagley School. From 1951-1953 he served in the US Army in Japan. On November 4, 1954 he married Katherine “Katz” Hoffman in Center. They made their home north of Center until they moved to Center in 1966. Bob farmed with his brother, Gordon (Bud), until 2000. He and Katz owned and operated Katz's Kitchen in Center for 17.5 years. Bob was a member of the American Legion Post #90, the VFW of Bismarck, and St. Martin's Catholic Church in Center. Bob was well known for his witty sense of humor such as “Lord willing and the creek don't rise”. He loved all kinds of music, especially the Happy Hour on KBMR on Sunday afternoons with Clarissa Lynn.
He is survived by his wife of 59 years, Katz; five special nieces and their families; one special nephew and his family; and numerous other nieces and nephews; one sister, Melba Nemec; two sister-in-laws, Edwina Perschke and Lakey Weiss.
Bob was preceded in death by his parents; three brothers, Raymond, Gordon, and Roger; seven brother-in-laws; and four sister-in-laws.
To order memorial trees or send flowers to the family in memory of Robert Perschke, please visit our flower store.