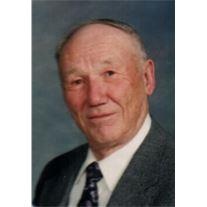 Robert Heid, 87, New Salem, died May 2, 2014 at Elm Crest Manor, New Salem, with his family by his side.
A funeral service will be held at 2 pm on Tuesday, May 6 at Salem United Church of Christ with Pastor Rose Trenbeath officiating. Burial will be at Peace Cemetery, New Salem.
Visitation will be held from 4 to 7 pm on Monday at the Buehler-Larson Funeral Chapel in New Salem with a prayer service at 7 pm. Visitation will continue one hour prior to the service at the church on Tuesday.
The fourth son born to Carl Sr. and Ida (Wolf) Heid, Robert John Heid was born June 2, 1926 on the family farm in rural New Salem. He was baptized on July 18, 1926 and confirmed on May 12, 1940 in the Evangelical and Reformed Church of New Salem. In January of 1953 Robert married Irene Rabe. They made their home on the family farm where they raised dairy cattle and worked the farm together. He enjoyed farming, raising cattle, and caring for his “wild” turkeys. After retiring from farming, Robert spent hours in his garden. He loved playing cards with his family and friends.
Blessed to have shared his life is his wife of 61 years, Irene Heid, New Salem; daughter, Sandra Heid , Hettinger; brother, Leonard (Alma) Heid, New Salem; and several nieces, nephews, and cousins.
Robert was preceded in death by his parents; brothers, Carl Jr. (Lavern), Ernest (Marion), and Elmer (Donna); and sister, Hazel (Leo) Bauer.
To order memorial trees or send flowers to the family in memory of Robert Heid, please visit our flower store.