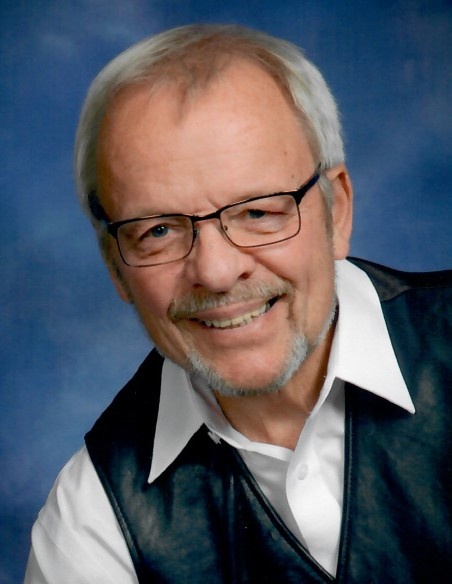 The funeral service for Richard Lee “Rick” Scharf, 77, will be held at 10:30 a.m. Thursday, June 24, 2021 at First Presbyterian Church, Mandan. There will be no viewing as cremation has taken place. Burial will be at 1:00 p.m. at the ND Veterans Cemetery, south of Mandan, with committal services done by the honor guard of local veterans’ organizations. With his wife, Diane, and his daughter, Kim, by his side, Rick passed away on June 17, following a long battle with cancer and dementia.

Rick was born March 19, 1944, to Harold and Helen (Farr) Scharf, at Mandan’s Deaconess Hospital. He was a twin, but unfortunately his baby sister did not survive.

Rick graduated from Mandan High School in 1963. Many of his fondest memories during his teenage years were of “sandlot” baseball games played with his buddy classmates. “I owned 2 nd base,” he often said, after making a one-time appearance on the pitching mound.

Upon graduation, Rick joined the Army National Guard and served for six years, being honorably discharged in 1969, with the rank of Sgt. E-5. He received many sharpshooter awards and continued honing his shooting skills, competing at Capital City Gun Club trapshooting events.

Rick married Patricia Ann Talbacka in 1967, and together, they became parents of three children.

In 2006, Rick married Diane Boit in Mandan. With the marriage, he inherited four stepchildren and numerous grandchildren.

After high school graduation, Rick was employed at L&H Manufacturing as a welder, then as an auto painter at Reidinger Motors. He then worked for many years at the City of Mandan Water Dept. before his final employment at the Mandan Public Schools. Rick retired in 2009.

In 1985, Rick began a photography hobby, which became his passion, during his years working with the Mandan News. He first concentrated on sports activities, but eventually the “photo guy” was seen at nearly every event involving Mandan. A favorite summer activity was Mandan’s three-day celebration of the Fourth of July when he’d walk the entire length of Main Street during the parade with a heavy camera bag hanging from his shoulder and wearing his traditional straw hat. He also took hundreds of photos of the riders and the traditional “fireworks” displays held each evening at the rodeo grounds.

As a photographer, representing the Mandan News, he received several “First Place” awards from the ND Newspaper Association’s annual competition for all North Dakota newspapers. He also won a Governor’s Photo award during the 1980s, which resulted in a three-day trip to Washington DC, compliments of the National Geographic Society office there.

During the past 20 years, before the onset of many health problems, Rick and his wife (and his NIKON camera) enjoyed traveling to various areas in Europe, including Germany, France and Great Britain. However, the highlight of these excursions was a trip to County Cork, Ireland, the home of his mother’s ancestors.

Rick absolutely loved his hometown of Mandan, where he often said that he grew up during the best of times in the 1950s and 60s, before the age of electronics. He was a social guy with a fantastic sense of humor and was a storyteller “par excellence,” so appreciated by his many friends, including sports coaches and players, teachers, policemen, rodeo cowboys, racetrack drivers, the historical re-enactors at old Fort Lincoln and, of course, school “kids” of all ages.

In lieu of flowers, please direct memorials to the local Cancer Society, the Central Dakota Humane Society, or to your favorite charity. But, most of all, please pass on an act of kindness in Rick’s memory.

To order memorial trees or send flowers to the family in memory of Rick Scharf, please visit our flower store.
Open