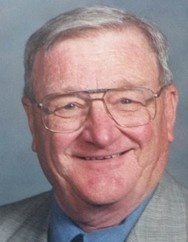 Richard Melvin Hagestuen was a great man to many.  Surrounded by family, Richard went to join his God on Wednesday, October 28, 2020. He was 87 years old.

If you ever had a phone conversation with Pastor Dick, you know they didn’t usually last long. It was considered a “good talk” if you were able to keep him on the phone for longer than a minute. Although his phone conversations were brief, his lessons and life ideals will live on for a far greater amount of time.

Born to Melvin and Juline (Nordaune) Hagestuen on March 19, 1933, in Starbuck, Minnesota, Richard was the oldest of four children. He fulfilled his role of being an older brother to his siblings, Donald (Sonja), Judy (Daniel Forde), and Lyndon (Ann).

He ventured to Minneapolis after high school, where he attended Augsburg College and Augsburg Seminary. It was during his time at Augsburg College that he met and fell in love with his wife of 65 years, Vernie Suckow. The two were married on September 16, 1955.  Besides his exceptionally good looks, rumor has it that Vernie couldn’t resist his contagious smile and boundless sense of humor. Together, they had three children, Dawn, Kirsten, and Jon.

He was an avid sports fan, often heard chanting, “Go, Mandan! Rah, rah, rah!” He could be found sitting through 5 hours of basketball games, and many outdoor football games. Not only did he attend sporting events, but he was also an active community member. He served on countless committees, counseled many people, baptized, confirmed, married, and buried others. His sense of humor and story telling made him approachable, relatable, and loveable. He was a true servant of God, and modeled his faithfulness by accepting many, despite their denomination or whether or not they were members of First Lutheran Church. Pastor Dick’s beliefs were echoed in his favorite song, “Jesus Loves Me”, and he dedicated his life to helping others find peace and comfort.

His beautiful wife, two daughters, Dawn (Robert Fix) and Kirsten (Oak Reile), along with his 7 grandkids, Beth (Jesse Brademeyer), Brian (Katie), and Megan Fix, Sam (Jessica), Ben (Desiree), and Jed (Courtney) Reile, and Grace (Brian) Krippner, and 20 greatgrandchildren were all blessed and lucky to call him theirs. Pastor Dick was greeted at heaven’s gates by three of his children, Jonathan, Kai, and Kari, three of his greatgrandchildren, Parker, Bentley, and Evlyn, and many other family members and friends.

In lieu of flowers, the family asks that donations be made to Lutheran World Relief. It is also asked that you find time in your busy day to tell someone you love them, and to share your best joke – bonus points if it’s inappropriate! As Pastor Dick would say, “God bless you, and remember that Jesus loves you!”

“Jesus loves me, this I know, for the Bible tells me so. Little ones to Him belong, they are weak, but He is strong.”

While it is the family’s wishes to celebrate his life with family, friends, and the community he served, due to COVID-19, services will be privately held.  Everyone is invited to view the service livestream on the church Facebook page, https://www.facebook.com/firstlutheranofmandan , at 10:30 am on Saturday, November 7, 2020.  A recording of the service will be available on the church and funeral home websites on Monday.

To order memorial trees or send flowers to the family in memory of Rev. Richard Hagestuen, please visit our flower store.
Open