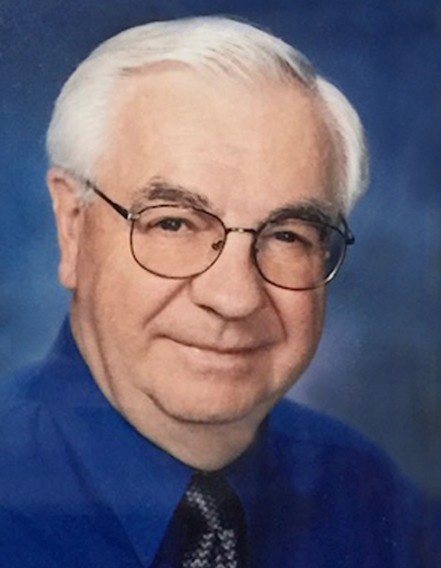 A committal service will be held at 11 AM on Monday, October 5, 2020 at the North Dakota Veterans Cemetery with burial to follow.

Ray was born August 11, 1934 in Hazen to Herbert and Olga (Kilber) Schuh.  He grew up in the Hazen area, graduating from Hazen High School in 1952. Ray then played Minor League Baseball in Rapid City, SD.  In May 1953 he enlisted in the US Navy and received a world tour while aboard 3 of Uncle Sam’s warships, most notably the US John Paul Jones.  He turned down a commissioned position for civilian life and was honorably discharged in 1957.  Ray attended two years of business school in Bismarck.  On May 13, 1960 he married Darlene Scheidt.  They moved to Dickinson and later to Glendive, MT.  In 1975, Ray and Darlene started Advanced Business Methods West, or ABM West, in Aberdeen, SD.  In 1979 they moved to Bismarck and opened another ABM West store, later branching out with stores in Minot and Dickinson.  In his spare time, Ray loved to bowl, golf, hunt, and fish.  Ray was a member of the Bis-Man Bowling Hall of Fame and was proud to have bowled a 300 game and got a hole-in-one in golf.  Ray had his small planes pilot license and owned an airplane with his brother.  He and Darlene enjoyed traveling to compete in archery events.  Ray was happy to pass down his love of sports to his kids and grandkids.  A devoted and loving husband, father, father-in-law, grandfather, great-grandfather, and friend, Ray will be deeply missed by those who knew and loved him.  His beloved Darlene passed away just 2 months ago on July 30, 2020.

Ray was preceded in death by his wife; parents; brother, Howard Schuh; and sister, Shirley Pfliger.

Memorials are preferred to the ND Veterans Cemetery.

To order memorial trees or send flowers to the family in memory of Raymond "Ray" Schuh, please visit our flower store.
Open