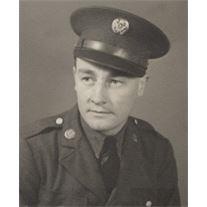 Raymond Butler, 94, Mandan, died October 1, 2012 at his home with his beloved wife of 65 years by his side.
A funeral service will be held at 11:00 am on Friday, October 5, 2012 at Mandan Baptist Church with Reverend Jon Wall officiating. Burial will be at the ND Veteran Cemetery with full military honors.
Visitation will be held from 5 to 8 pm on Thursday, October 4, 2012 at Buehler-Larson Funeral Home, Mandan, and continue one hour prior to the service at the church on Friday.
Raymond was born June 17, 1918 in Mandan to Frank & Sarah (Carlson) Butler. He grew up in Morton County and attended school south of Mandan. Ray worked on various farms in Morton County prior to enlisting in the United States Army in 1941. Raymond served at Fort Snelling in the mobile equipment servicing department. He was deployed overseas and arrived in Ireland April 29, 1942. From Ireland, he was mobilized to North Africa where he participated in the Algeria-Morocco & Tunisia campaigns. He then moved on to Italy where he fought in the Naples-Foggia and the Rome-Arno campaigns. Ray was wounded at Cassino on February 2, 1944 and later awarded a purple heart, four bronze stars, and a Presidential Unit Citation, among medals received. A very special moment this past 4th of July was an award ceremony at his home in which his 10 medals, ribbons, and citations were presented to him by the motorcycle riders from the Vietnam Veterans, Legacy Veterans, Second Brigade, and other riding clubs. Returning to the States October 2, 1944, Ray served as a Sergeant, receiving an honorable medical discharge January 18, 1945. Upon his return, he worked for Service Motor Sales in Mandan and later for Missouri Valley Meat Company where he retired after 37 years.
Raymond was united in marriage to Caroline June Fix on May 16, 1947 in Mandan where the couple made their home for over 65 years. He is survived by his wife, Caroline; one son, Raymond (Debby), Grand Forks; two daughters, Kathy Nelson, Moorhead, MN and Sandy (Alex) Neigum, Mandan; six grandchildren, Christopher (Jen) Nelson, Fargo, Jenny (Mike) Duncan, Escondido, CA, Naomi Nelson, Fargo, Amy Neigum (Bryan Fischer), Bismarck, David (Julie) Butler, Butte, MT, and Joshua Neigum, Mandan; three great grandchildren, Arlo and Soley Nelson and Max Harris all of Fargo; two brothers, Wayne (Marge) and Gary (Alice), all of Mandan; and one sister, Donna Ennen, Menoken.
Raymond was preceded in death by one daughter, Sheila Ann; his parents; five brothers, Robert, Leroy, George, Arnold, and Walter; two sisters, Genevieve and Erma; and one son-in-law, Stephen Nelson.
Ray was extremely proud of his family, especially his devoted wife Caroline, who was his wonderful and dedicated primary caregiver. He loved spending holidays with everyone, especially his grandchildren. He loved talking about the Dirty 30’s, visiting the old homestead, and just reminiscing a good life.
To order memorial trees or send flowers to the family in memory of Raymond Butler, please visit our flower store.