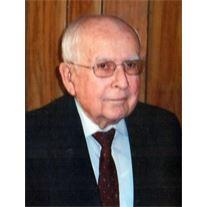 Peter J. Gartner, 92, Mandan, died July 21, 2014 at Sanford Medical Center, Bismarck, with his family by his side.
A funeral service will be held at 10:30 am on Friday, July 25, 2014 at Christ the King Catholic Church, Mandan, with Fr. Nick Schneider officiating. Cremation has taken place and inurnment will be at the North Dakota Veterans Cemetery with full military honors.
Visitation will be held from 6 to 7 pm on Thursday, July 24 at Buehler-Larson Funeral Home, Mandan, with a Parish Vigil at 7 pm. Visitation will continue one hour prior to the service at the church on Friday.
Pete was born May 25, 1922 in New England, ND to Michael and Anna (Koppinger) Gartner. Raised and educated in New England, he graduated from St. Mary’s High School in 1940. Following graduation, he took over management of the New England Cleaners along with the State Theatre where he had been a projectionist for 3 years during high school. In 1942 Pete enlisted in the Army Air Corp Glider Pilot, serving in the European Theatre of Operations for 2 ½ years and was honorably discharged in December 1945. In 1946, he reopened the cleaning plant and operated the Theatre in New England. Pete met Beryl Van Dervoort of Milbank, SD on a blind date. She owned and operated a beauty shop in Bowman, ND. They were married on April 24, 1946. In 1947 they closed the cleaning shop and sold all of the equipment, along with their home in New England, after deciding to move to Dickinson where Pete worked for First National Bank. Their first child, Dudley, was born in 1949 during which time Pete built a home on the west end of Dickinson. Over the next several years they became parents to three more sons and a daughter. He worked in the evenings as a projectionist at the Dickinson theaters along with volunteering as a fireman for many years. In 1951, Pete left the bank and started working for Vantine Paint and Glass Store in Dickinson. During this time, he began his own contracting business which he owned and operated. In 1967, he took the position of Fire Marshal for the City of Dickinson Fire Department. He held the position until July of 1971, when he resigned and accepted the position of Fire Chief for the City of Mandan. During his career as Mandan Fire Chief, he built two new fire stations and added a number of new pumper trucks to give protection to the outlying areas of the city. At that time the fire department grew to 5 full time employees and 27 paid “on call” firefighters. Pete was part of a number of fire service organizations for ND, having held many board positions. He was president of the ND Fire Prevention Association from 1970 thru 1975, served 2 terms as president of the ND Fire Chief Association, and served as Secretary and Treasurer for 14 years for the ND Fire Prevention Association. He also started and hosted the ND State Fire School in Mandan for 18 years. Pete strongly believed that he was able to do these things and more because of the support and help of his wife and family. A beloved husband, father, grandfather, and friend, Pete will be missed by all who knew and loved him.
Blessed to have shared his life is his wife of 68 years, Beryl, Mandan; five children, Dudley (Sharon), Bismarck, Craig, Dickinson, Frank (Debbie), Dublin, CA, Rodney (Judy), Fargo, and Marla (Kenneth) Praus, Dickinson; 11 grandchildren, Jason Gartner, Minot, Jennifer (James) Mohundro, Lincoln, ND, Angie (Jim) Mackey, Dickinson, Nichol (Tony) Kordonowy, Dickinson, Amy Jo (Ryan) Schiff, Dickinson, Alesha and Matthew Gartner, Dublin, CA, Joshua Gartner, US Air Force, Hawaii, Rhianna (Ryan) Spiekermeier, Shakoppee, MN, Zack (Sarah) Olson, Fargo, ND, and Andy Olson, Hawaii; 13 great grandchildren, Josie and Collin Spiekermeier, Rasia, Sofia, and Frost Mackey, Stryker Kordonowy, Damon Fichter, Bryce Gartner, Jasmine Stacy, Scott and Andrew Mohundro, Gavin Gartner, and Brayden Baraibar; and one brother, John (Betty) Gartner, Hatboro, PA.
Pete was preceded in death by his parents; four brothers, Carl, Adam, William, and Christ; and one sister, Katherin Sears.
In lieu of flowers, memorials are preferred to the ND Firefighters Hall of Fame, 52 N Main, Garrison, ND, 58540.
To order memorial trees or send flowers to the family in memory of Peter Gartner, please visit our flower store.