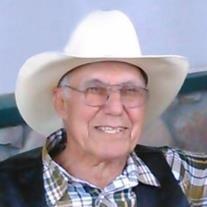 Visitation will be held from 4 to 8 pm on Thursday, January 15 at St. Martin’s Catholic Church with Parish Rosary / vigil at 7 pm. Visitation will continue one hour prior to the service at the church on Friday.

Paul was born May 2, 1934 in Prosser, WA to Peter and Mathilda (Gress) Gress. His family moved to North Dakota when he was 3 years old. He attended country school through the eighth grade. Paul completed Auctioneering School. On April 19, 1960 he married LaVerne Burkhardt at Crown Butte. They moved to Center in 1966 and Paul worked as a carpenter for a short time and as a millwright until 1974. He then pursued his passion and began farming and ranching full time. Ranching was his life and he also enjoyed hunting deer and coyotes and watching Fox News. Paul loved family get togethers, his children and grandchildren meant the world to him. A warm and loving man, everyone loved being around Paul and he will be deeply missed by those who knew and loved him.

Paul was preceded in death by his parents; daughter, Beverly; sister, JoAnne Ackerson; and brother, Harry Gress.
To order memorial trees or send flowers to the family in memory of Paul Gress, please visit our flower store.