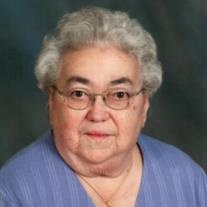 Ottilia “Tillie” Bahm entered into her Lord’s care on January 8, 2015, under the care of hospice at her daughter’s home in Bismarck.

Mass of Christian burial will be held at 10:30 am on Tuesday, January 13 at Spirit of Life Catholic Church, Mandan, with Monsignor Chad Gion celebrating. Burial will be at the North Dakota Veterans Cemetery.

Visitation will be held from 5 to 8 pm on Monday, January 12 at Buehler-Larson Funeral Home, Mandan, with a Parish Rosary / Vigil at 7 pm. Visitation will continue one hour prior to the service at the church on Tuesday.

Ottilia, who always preferred “Tillie”, was born on May 5, 1928 in Mandan to Louis and Elizabeth (Martin) Matz. She grew up and attended St. Joseph’s Grade School in Mandan and one year at St. Benedict’s Convent in St. Joseph, MN. She graduated from Mandan High School in 1945. Tillie worked at the Lewis and Clark Hotel as a bellhop, and was also a telephone operator in Mandan and Bismarck. On April 28, 1949 she married John Bahm at St. Joseph’s Catholic Church in Mandan. For 5 years they lived in a new home in Mandan which he built for them himself. They then bought his family’s farm south of New Salem from his siblings, and that’s been Tillie’s home since 1954. She quickly learned to be a farm wife, including how to drive, bake bread, butcher chickens, can fruits and vegetables, and go on a parts run for John. Tillie never learned how to milk a cow and left that job to John and the kids. More importantly, together they raised eight children; four daughters and four sons. John passed away in 2000.

Tillie was preceded in death by her husband of 51 years; her parents; 6 brothers’ 6 sisters; a son-in-law, Rob Haugen; and one great grandson, Conner Bahm.

In lieu of flowers, memorials are preferred to the ND Veterans Cemetery or the St. Alexius Hospice Program.
To order memorial trees or send flowers to the family in memory of Ottilia Bahm, please visit our flower store.