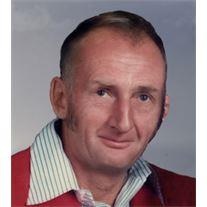 Oscar John, 87, New Salem, died September 1, 2012 at Sanford Hospital, Bismarck.
A funeral service will be held at 10:00 am on Thursday, September 6, 2012 at the Buehler-Larson Funeral Home Chapel in New Salem with Reverend Joshua Eddy officiating. Cremation has taken place and the family will greet friends one hour prior to the service at the chapel on Thursday.
Oscar was born April 11, 1925 at New Salem to Frederick and Lily (Just) John. He attended school through the 8th grade in New Salem. Oscar married Linda Carlisle on March 18, 1969 in Mandan. They made their home north east of New Salem where he farmed his entire life and proudly raised their son, Russ.
Left with memories of a life well lived is his wife of 43 years, Linda and son, Russ both of New Salem.
Oscar was preceded in death by his parents.
To order memorial trees or send flowers to the family in memory of Oscar John, please visit our flower store.