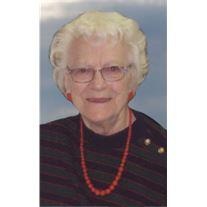 Olga M. Vogelpohl, 94, Mandan, passed away January 1, 2013, at the Bismarck Baptist Home.
A funeral service will be held at 11:00 am on Saturday, January 5, 2013, at the Mandan United Methodist Church with Reverend Bruce Adams officiating. Burial will be at the Mandan Union Cemetery.
Visitation will be held from 6 to 8 pm on Friday, January 4, 2013, at Buehler-Larson Funeral Home, Mandan, and continue one hour prior to the service at the church on Saturday.
Olga Maria Vogelpohl was born March 1, 1918, to Wilhelm and Regina (Weisz) Ziegler on the family farm near Hebron. Raised on the family farm, Olga attended Hebron schools and after graduating from Hebron High School, attended Dakota Business College in Fargo, graduating in 1937. In the fall of 1937, Olga moved to Mandan and was employed with the Mandan Beverage Company for twelve years, followed by employment for several years with Klein Motor Sales and with the Mandan Hospital. Olga married Earl Vogelpohl on October 26, 1946, and together they owned and operated the Vogelpohl Refrigeration Service, the Vogelpohl Apartments, and the Quick Clean Center Self-Service Laundry. In 1964, Olga became employed with the City of Mandan, being appointed Mandan City Treasurer, and also later serving as Deputy City Auditor. She retired from the City of Mandan in 1979. During the early years of her retirement, she traveled both in the United States and abroad. Her overseas’ trips took her to many countries, including Germany, England, China, Thailand, New Zealand, and Australia.
Olga was a long-time member of the Mandan United Methodist Church and was very active, serving as treasurer for several years, working with the United Methodist Women’s organization, and singing in and also directing the church choir. She was also active with the Dakota Methodist Builders’ Club and served as its treasurer for several years.
Olga was an avid sports fan, especially of Mandan American Legion baseball and Mandan High School boys and girls basketball, and was a regular in attendance at these events. An avid bowler in local leagues, Olga competed in many local and state tournaments. Her over thirty-year bowling career culminated in 1994 with her induction into the Bismarck-Mandan Women’s Bowling Association Hall of Fame.
Olga loved playing cards, especially the game of bridge. She greatly enjoyed the companionship of her fellow card players and the long friendships she had with them.
Always a farm girl at heart, Olga remained close to her roots, and very much cherished the family God gave her. She is survived by her son and daughter-in-law, Steven and Kathy Vogelpohl, of Bismarck; son and daughter-in-law, Lyle and Audrey Vogelpohl, of Seattle; grandchildren, Martin (Katie) Knoll of Bismarck and Ella (Darrell) Engelking and Larry Vogelpohl of Seattle; great grandchildren, Elizabeth and Marley Knoll, Scott and Annette Smith, Kyle and Erin Vogelpohl, Heather Russell, and Seth Johnston; several great, great grandchildren; and several nieces and nephews.
Olga was preceded in death by her parents; her husband, Earl, who passed away in 1972; and by her brother, Lenhart Ziegler; and sisters, Elsie Ziegler and Erna Saxowsky.
Memorials are preferred to the Mandan United Methodist Church or the charity of the donor’s choice.
To order memorial trees or send flowers to the family in memory of Olga Vogelpohl, please visit our flower store.