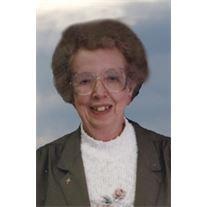 Neoma P. Maier, 90, New Salem, died May 10, 2013 at Elm Crest Manor, New Salem.
A funeral service will be held at 2:00 pm on Monday, May 13, 2013 at St. Peter Lutheran Church, Hannover, ND, with Reverend Russell Fitch officiating. Burial will be at Hannover Cemetery.
Visitation will be held from 2:30-3:30 pm on Sunday, May 12, 2013 at Elm Crest Manor, New Salem and continue from 5-7 pm at the Buehler-Larson Funeral Chapel in New Salem. Visitation will continue one hour prior to the service at the church on Monday.
Neoma was born November 6, 1922 in St. Francis, KS to Edward and Rossie (Hedding) Schuricht. She lived in Armel, CO with her parents and brother, Kenny. Neoma graduated from Yuma Union High School and Concordia Teachers College in Seward, NE. This young woman arrived in ND by train for her first teaching position. At that time all she knew of North Dakota was that Bismarck was the capital, that it got cold, and had seen a picture of North Dakota’s drifting snow in a geography book. She taught first through fourth grades in Hannover for two years then returned to Colorado and taught at Emmaus and Emmanuel schools. This was during World War II and she took time from work to sew parachutes and cots for the troops.
Raymond wasn’t ready to let her stay there and Neoma and Raymond were married in Denver, CO on June 22, 1947. Back in ND, Neoma taught school at Otter Creek, Fairview District, and Pleasant Valley schools.
Neoma was very active in church and community groups. She was a 4-H leader, Sunday school teacher and superintendent, active the Hannover Farmerettes Homemakers club, and was a 26 year Soil Conservation Auxiliary member. The Lutheran Women Missionary League (LWML) was an important part of her life. She served locally, was District president in 1977 – 1980, and was the national LWML leadership committee chairperson.
Neoma had many hobbies and talents. She enjoyed painting and was a member of the New Salem and Center art associations. Some of her paintings hung in the governor’s mansion. She was a member of the Women’s Life Association in New Salem. Neoma was an optimistic and “can-do” person. She loved to bake and Raymond loved her pies.
Neoma and Raymond lived south of Hannover. After 40 years on the farm, Neoma and Raymond moved to New Salem in 2002. They would have been married 66 years this June.
The family thanks
Elm Crest employees and volunteers for their great care of Neoma.
Blessed to have shared her life is her husband, Raymond Maier, New Salem; daughters, Katherine (Pat) Doll, New Salem and JoAnne (Blane) Hoesel, Bismarck; sons, Alan (Marilyn), Colorado Springs, CO and Duane (Karen), New Salem; grandchildren, Jeni (Bill) Belik, Chad Doll, Bryce (Anna) Roberts, Jesse (Carrie) Maier, Jason Maier, Jake (Carly) Maier, Chase (Nicole) Doll, Stacy (Marty) Jepsen, and Jacqueline (James) Fernandez; and eight great grandchildren.
Neoma was preceded in death by her parents, Edward and Rossie; brother, Kenny; and son, Tommy.
In lieu of flowers the family prefers memorials.
To order memorial trees or send flowers to the family in memory of Neoma Maier, please visit our flower store.