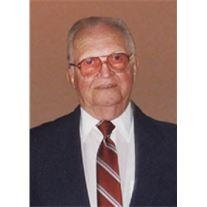 Milton Repnow, 83, Mandan, formerly of New Salem, passed away December 17, 2011 at his home surrounded by his family.
A funeral service will be held at 10:30 am on Wednesday, December 21, 2011 at Peace Church, New Salem, with Reverend Joshua Eddy officiating. Burial will be at the North Dakota Veterans Cemetery at 2:00 pm with full military honors provided by the Mandan VFW Post 707 and American Legion Post 40.
Visitation will be held from 5 to 7 pm on Tuesday, December 20, 2011 at the Buehler-Larson Funeral Chapel in New Salem and continue one hour prior to the service at the church on Wednesday.
Milton was born January 31, 1928 in Underwood, ND to Walter and Bertha (Anderson) Repnow. He was raised and attended school in the Underwood area. Drafted into the US Army on April 26, 1946, Milton was sent to the Pacific Theater of Operations, arriving September 30, 1946. He served in Japan during WWII, returning home on April 7, 1947. On December 31, 1949 Milton married Elaine Seeger in New Salem. Milton worked construction jobs as an electrical lineman for REA in SD, ND, and MN. Later he worked at the power plants in the area until 1980 when he was injured in a fall and was disabled. Milton and Elaine lived in New Salem from 1961 until April 2011 when they moved to Liberty Heights in Mandan. Milton was a lifetime member of the New Salem American Legion Post 91 and VFW Post 1326 of Bismarck. Blessed to have shared his life is his wife of 62 years, Elaine, Mandan; three sons, Dennis (Bonnie) Repnow, Bismarck, Darrell (Sharilan) Repnow, Hazen, and Daniel (Pam) Repnow, Dickinson; 8 grandchildren; 13 great grandchildren; two brothers, TeRoy (Marion) Repnow, Underwood and Burnell (Doris) Repnow, Minot; and two sisters-in-law, Vi Repnow, Bismarck and Dorothy Repnow, Copeville, WA.
Milton was preceded in death by his parents; two brothers, Walter Jr. and Delano; and two infant sisters.
The family prefers memorials to the donor’s choice.
To order memorial trees or send flowers to the family in memory of Milton Repnow, please visit our flower store.