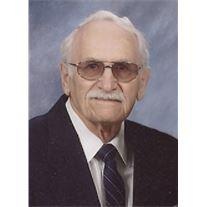 Milton Berreth, 93, Mandan, died November 3, 2013 at St. Joseph Hospital, Brainerd, MN with his family by his side.
A funeral service will be held at 10:00 am on Thursday, November 7, 2013 at Bismarck United Church of Christ with Reverend Gretchen Deeg officiating. Burial will be at the ND Veterans Cemetery with full military honors.
Visitation will be held from 5 to 7 pm on Wednesday, November 6, 2013 at Buehler-Larson Funeral Home, Mandan, and continue one hour prior to the service at the church on Thursday.
Milt was born March 20, 1920 in Carson, ND to George and Elizabeth (Reister) Berreth. He was raised and educated in Carson. As a teen he worked with the Diehl brothers on a relative’s farm. Milt met Lydia Huber through friends in Carson and they planned for a life together. In December 1941, Milt entered the US Army Air Force and served as a communication supply technician in the European African Middle Eastern Theater in WWII. Milt returned home in December 1945 and he and Lydia were married a month later on January 27, 1946. Milt began working as a linoleum mechanic at Vantine Paint and Glass in Mandan. After several years he was promoted to Manager. Through successful sales with the company, Milt and Lydia earned many trips, including the Bahamas, Cancun, spent their 25th Anniversary in Mexico, Austria, North Africa, Spain, and Hawaii three times. They shared many wonderful times and made countless memories on their travels. Milt took great pride in his work, offering top notch customer service and workmanship. His sons would help him at the store and he taught them the value of hard work and treating the customer right. Milt retired in 1985 after 39 years with the company. He took on golf with the same passion he had for business, a game he enjoyed into his 80’s. He also enjoyed playing pinochle at the Mandan Eagles and an occasional trip to the casino. Generous and giving of his time, Milt was a member of the Lions, Eagles, and Elks Clubs, a 50 year American Legion member, served on the Board of Directors for the Mandan Chamber and Mandan Hospital, and helped start the Lions Christmas Tree selling program. Above all, Milt loved his family. Lydia was the love of his life and they were blessed to share nearly 70 years together. Milt was committed to his sons, always supporting and helping them. It was important that they each received an education. Milt and Lydia cared for their grandchildren when they were young and enjoyed attending their activities. Milt loved taking the grandkids to buy fireworks on the Fourth of July and seeing their enjoyment as they lit them off. Spending holidays together brought many great memories and Milt came to love Lydia’s family over the years. A beloved father, grandfather, and great grandfather, Milt will be missed by those who knew and loved him.
Blessed to have shared in his life are two sons, Dale (Julie) Berreth, Salt Lake City, UT and Gary (Sandy) Berreth, Nisswa, MN; six grandchildren, Todd (Meg) Berreth, Trevor (Camianne) Berreth, Teague Berreth, Allison Shepard, Erin (Tanner) Hunter, and Ryan (Angela) Berreth; two great grandchildren; and numerous nieces and nephews.
Milt was preceded in death by his parents; his wife in October 2012; two sisters; and six brothers.
In lieu of flowers, memorials are preferred to Bismarck United Church of Christ.
To order memorial trees or send flowers to the family in memory of Milton Berreth, please visit our flower store.