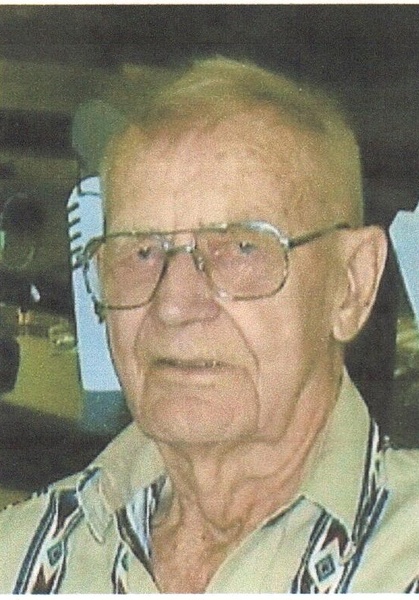 A funeral service will be held at 11:30 am on Friday, December 16, 2016 at St. Paul's Lutheran Church, Center, with Reverend Dennis Ristvedt officiating. Burial will be in the Hensler Cemetery.

Visitation will be held from 5 to 7 pm on Thursday, with a Prayer Service at 7 pm, December 15, at St. Paul's Lutheran Church. Visitation will continue one hour prior to the service at the church on Friday.

Melvin was born to Mikal and Bertine Sorstokke on their homestead in eastern Oliver County on August 11, 1914. He attended Marysville and Hensler schools. Melvin took over operation of the farm in 1936, the year his dad died and the year with the coldest winter and hottest summer on record in North Dakota.

On June 7, 1942, he married Wilma Jenness, the only daughter of Ellis and Marie Jenness. They had no children. Wilma died on November 12, 1955. Melvin raised grain and cattle. He could fix any machine, sometimes using string instead of the proverbial baling wire to fix tractors. But his heart was in raising Hereford cattle. Although he worked hard on branding and shipping days, he enjoyed the companionship of neighbors who helped with the cattle and the potluck dinner.

Melvin served on the ASCS committee and was a 4-H leader. He served on the Marysville school board and, after school reorganization, on the first Center School District board.

In his younger years, Melvin enjoyed playing baseball. He pitched for the Hensler team, playing teams from the area. On baseball days everyone came to watch the game and picnic with neighbors.

On June 21, 1965, Melvin married Irene (nee Epperson) Jenness in Center. Irene was the widow of Warren "Bud" Jenness, the oldest son of Ellis and Marie Jenness and brother of Wilma. Melvin and Irene continued to farm.

When Melvin married Irene, he changed his life drastically by bringing three teenagers into it. Oh joy, oh rapture! However, Melvin thought of Jim, Iris, and Carol as his own children. He taught them so much!

Melvin and Irene often went dancing on Saturday evenings and bowled in Mandan for several years. They spent many summer Sunday afternoons at the Missouri River near Hensler boating and picnicking with friends. Melvin was an excellent water skier, and he would get into skiing races with others there.

Melvin semi-retired in 1983. He and Irene moved to Washburn. He continued to raise some crops, but quit the cattle business. He became a woodworker, turning bowls on a lathe creating many designs with different woods. He and Irene traveled to craft fairs to sell his bowls.

In 2009 Melvin and Irene moved to Touchmark in Bismarck where they frequently played cards and enjoyed other activities. Irene died on July 4, 2010.

Melvin was preceded in death by his wives and his siblings, Andrew, Minnie Peterson, Carl, Johnny, and Harold.

Melvin was a quiet man with a great sense of humor. He always chuckled when someone told a funny story, fell off a horse, or forgot to drop the tow rope when learning to water ski. He was a gentleman's gentleman who was always ready to help others. We will miss him.
To order memorial trees or send flowers to the family in memory of Melvin Sorstokke, please visit our flower store.