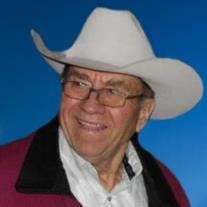 A funeral service will be held at 10:30 am on Monday, August 10, 2015 at Peace Church, New Salem, with Reverend Joshua Eddy officiating. Burial will be at Peace Cemetery, New Salem.

Visitation will be held from 4 to 7 pm on Sunday, August 9 at Buehler-Larson Funeral Home, Mandan, and continue one hour prior to the service at the church on Monday.

Marvin was born February 7, 1938 on a farm north of New Salem, the fourth of five children to John and Nina (Hutchison) Sorge. He attended school in New Salem. On June 7th, 1959, he married Marjorie Danzeisen. They lived on the family farm where they raised five children. Marvin was passionate about farming, ranching and welding. He put his creativity and hard work to use by inventing and building equipment used by his fellow farmers and ranchers. On June 22, 2002 Marvin married Etta Burian-Olson in Medora. They shared 13 wonderful years together. Marvin was a member of Peace Church in New Salem, was active in 4-H and the New Salem Saddle Club, and was on the Board of Directors for the North Dakota High School Rodeo Association. A beloved husband, father, and grandfather, he will be missed by those who knew and loved him.

Marvin was preceded in death by his parents; his first wife, Marjorie; a brother, Robert Sorge; and a brother-in-law, Edgar Schwagler.
To order memorial trees or send flowers to the family in memory of Marvin Sorge, please visit our flower store.