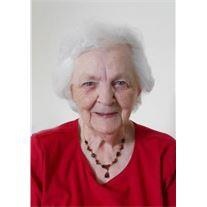 Martha Mary Kunkel, 89, New Salem, died June 1, 2012 at Elm Crest Manor, New Salem.
Visitation will be held from 1-2 pm on Monday, June 4, 2012 at Elm Crest Manor, New Salem and continue from 3-8 pm at the Buehler-Larson Funeral Chapel in New Salem. Cremation will take place and a funeral service will be held at 2:00 pm on Saturday, June 16, 2012 at the Salem United Church of Christ, New Salem, with Reverend Ron Hildahl officiating.
Martha was born December 20, 1922 in New Salem, the daughter of Peter and Annie (Morrelle-Zinn) Vellios. Raised and educated in New Salem, she graduated from New Salem High School in 1941. Martha lived in or near New Salem all of her life. She worked at various jobs before her marriage, such as wrapping butter and testing cream to picking turkeys at the Armour Creamery in Mandan. On December 20, 1944 she married Lorenz Kunkel in Billings, MT. They moved to the family farm south of New Salem where they raised four children. Martha was a hard worker, living without electricity or running water, using a wringer-type washer for which she had to carry water in and out, and hanging clothes on the line to dry, even in the cold of winter. She worked beside her husband shocking grain, hauling bales, and doing the separating after the milking was done. Family jobs were often made fun by the lunches she would pack to take along picking rocks, planting potatoes, and such. Many Sunday afternoons the family would go to the Heart River to fish, swim, and picnic. Martha was a wonderful cook and her family especially enjoyed her Sunday fried chicken dinner with mashed potatoes, milk gravy, corn on the cob, and rhubarb custard pie. She did a lot of canning and also butchering chores to keep her family well fed. Although it wasn’t an easy life, she didn’t complain, she did what she had to do.
After Martha and Lorenz retired from the farm and moved into New Salem in 1968 they liked to fish and garden, and also made several trips to Montana and Minnesota to visit family. One of her favorite hobbies was reading. She would read the New Salem history books over and over and nearly had them memorized. Martha had an incredible memory when it came to people’s birthdays and things that happened many years ago. She worked at Schmidt’s Café as a cook from 1968 until 1984. She also belonged to Sunnyside Homemaker’s Club and Women’s Guild at the Presbyterian Church for many years.
Martha continued living in her home in New Salem after Lorenz passed away on November 13, 1993, until her health forced her to move to Elm Crest Manor in 2004. Despite having both legs amputated due to diabetes, she always had a positive attitude and was so happy to be taken care of by the wonderful people at Elm Crest who she so enjoyed.
Those thankful for sharing her life are her four children, Bill Kunkel, Bonnie (Leonard) Maier, all of New Salem, Judy (Curt) Kroh, Washburn, and Dave (Cindy) Kunkel, Beulah; 8 grandchildren, Jeff, Mike, and Joey Kunkel, Stacy Maier, Jeremy and Deanna Toepke, Travis Kroh, and Dana Armstrong; 8 great grandchildren, Jaylen and Jordan Kunkel, Devon, Dayton, and Alexa Kunkel, Roman Maier, and Boston and Berkley Armstrong; one sister, Ellen Miller, Salem, OR; special friends, Nina Filibeck and Lenore Schmidt; and all of her friends at Elm Crest Manor.
Martha was preceded in death by her husband, Lorenz; her parents; two brothers, Robert and George Vellios; an infant sister, Esther, who died at 17 months of age in 1929; and two grandchildren, Michelle Maier and Damian Kunkel.
To order memorial trees or send flowers to the family in memory of Martha Kunkel, please visit our flower store.