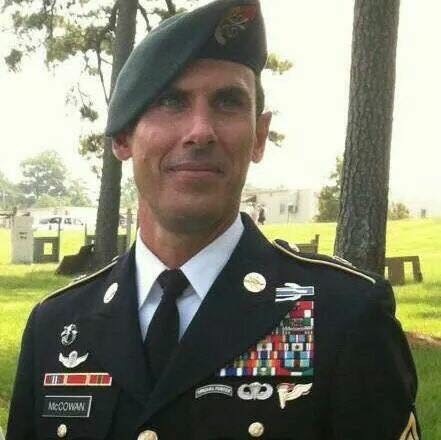 A funeral service will be held at 11:00 am on Saturday, February 18, 2017 at the New Salem High School with Rev. Joshua Eddy officiating.

Mark Alan McCowan was born April 9, 1971 in Bismarck, ND to Gene and Delores (Wilkens) McCowan. He was raised and educated in New Salem, ND, graduating from New Salem High School in 1989. Mark joined the United States Army on October 2, 1989 and began his career as a Motor Transport Operator. He served in various positions while stationed in Mannheim, Germany and Fort Riley, KS before he attended the Special Forces Assessment and Selection Course and the 18C Special Forces Qualification Course to become a Special Forces Engineer Sergeant in 2002. Master Sgt. McCowan served with the 5th Special Forces Group (Airborne) at Fort Campbell, Kentucky, and the 1st Special Warfare Training Group (Airborne) before being assigned to the 3rd Special Forces Group (Airborne). During his career, he served in six combat deployments in support of Operations Iraqi Freedom and Enduring Freedom.

On January 12, 2005 Mark married Candace L. McCowan in Clarksville, TN. Mark and Candace were members of Manna Church in Fayetteville, NC. Mark was also a member of the Special Operations Survivors organization.