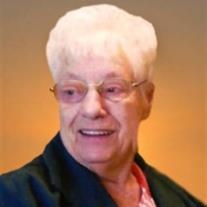 Marie Fetzer, 91, Mandan, died March 27, 2015 at Missouri Slope Lutheran Care Center, Bismarck, with her family by her side.

A funeral service will be held at 11 am on Friday, April 24, 2015 at First Lutheran Church, Mandan, with Reverend Lee Herberg officiating. Cremation has taken place and the family will greet friends one hour prior to the service at the church on Friday. Burial will be held at a later date at Sunset Memorial Gardens in Jamestown, ND.

Marie was born December 7, 1923 to Adolph and Anna (Hejlik) Kraulik in Brocket, ND. She was raised in Devils Lake with her siblings, Alice, Margaret, Minnie, Blanche, Raymond, and Caroline. Marie worked at the Fairmont Creamery. She met Walt Fetzer of Anamoose, ND while he was working highway construction with her brother, Raymond in Devils Lake. In 1943 Marie and Walt moved to Spokane, WA where they were married on March 25, 1944. They moved back to Devils Lake in 1945, then to a farm south of Anamoose, and later to a farm east of Jamestown. While in Jamestown, Marie was employed for 13 years as a seamstress at the ND State Hospital. In 1972 she and Walt moved to Grand Rapids, ND and were the caretakers of the LaMoure County Memorial Park. In 1982, they retired and moved back to Jamestown. After Walt’s death in 1985, Marie moved to Mandan.

Marie is survived by two brothers-in-law, Victor (Shirley) Fetzer, New Jersey and Bill (Regina) Fetzer, Jamestown; one sister-in-law, Theresa Kraulik, Bowman; and many nieces and nephews. Her family will forever hold fond memories of their time spent at the farm and park with Marie. She was truly “our special Aunt Marie.”

Marie was preceded in death by her parents; her husband; and all of her siblings.
To order memorial trees or send flowers to the family in memory of Marie Fetzer, please visit our flower store.