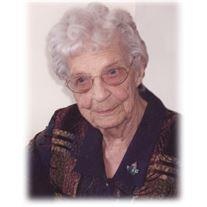 Margaret “Dolly” Keller, 98, New Salem, died April 3, 2011 at Elm Crest Manor, New Salem. Mass of Christian burial will be at 10:30 AM on Thursday, April 7, 2011 at St. Pius V Catholic Church in New Salem with Reverend Amalraj Roche as celebrant. Burial will be in the church cemetery. Visitation will be on Wednesday from 1:30 to 2:30 PM at Elm Crest Manor and from 4:00 to 8: 00 PM at the church, where a rosary will be said at 7:00 PM, followed by a parish vigil. Visitation will continue one hour before services at the church on Thursday.
Dolly was born on March 2, 1913 at St. Anthony, the daughter of Elizabeth (Stager) and Mathew Schmitz. They lived in many towns prior to settling in Mandan where Dolly graduated from the 8th grade. She then cared for the children of several local families living south of Mandan. In 1928, she moved to New Salem where she worked at a hotel and restaurant for George Fetch. She met Walter Keller there and they married in November of 1929. During her marriage to Walter, Dolly worked at the Idle Hour Bar and Café, The Coop Grocery and the New Salem Journal. She also spent many hours at Elm Crest Manor where she volunteered, fixing hair for the residents as well as playing cards and just visiting. Dolly particularly enjoyed traveling to visit family members and friends far and near. She was proud of the fact that she had flown to so many of the states in the union. She also loved to play cards with her family and friends. She was a member of St. Pius Catholic Church, Christian Mothers, the Community Club, Bridge Club and the Richardton American Legion Auxiliary. She was most proud of the life-saving award she was given when she was in her late 80’s. She saved the life of a neighbor by recalling how to perform the Heimlich maneuver. Dolly is survived by two daughters, Joy Forster of Richardton and Margo Gross of Charlotte, North Carolina; her son-in-law, Lloyd Riggins of Sidney, Montana; her daughter-in-law, Sharen Keller of Bismarck; 18 grandchildren; 37 great-grandchildren and 17 great great-grandchildren.
She was preceded in death by her husband, Walter, who died in 1986; her son, Jack; her daughter, Vale Riggins; her son-in-law, Richard Forster; her parents; two brothers; three sisters, two grandsons; and three great-grandchildren.
To order memorial trees or send flowers to the family in memory of Margaret Keller, please visit our flower store.