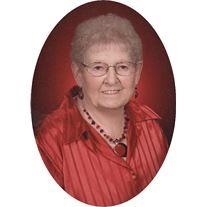 Maranda “Randy” Held, 83, Mandan, died January 16, 2013 at Sanford off Collins, Mandan.
A funeral service will be held at 1:00 pm on Monday, January 21, 2013 at United Church of Christ, Bismarck, with Reverends Ron Hildahl and Camille Grothier officiating. Burial will be at Bethel Cemetery, New Salem.
Visitation will be held from 4 to 7 pm on Sunday, January 20, 2013 at Buehler-Larson Funeral Home, Mandan, and continue one hour prior to the service at the church on Monday.
Delivered by her grandmother who was a midwife, Maranda was born on May 17, 1929, the youngest of twelve children to Karl and Fredricka (Schilling) Vollmer on the family farm in Lowry, SD. At the age of three, the family moved to a farm north of Akaska, SD where she attended grade school and graduated from high school in Glenham, SD. After graduation, she attended nurses training at Bismarck Hospital School of Nursing graduating in 1952. While there, she met her future husband thru some of her classmates. Chester and Randy married in the fall of 1952 on October 11th and moved to the George Held farm south of New Salem. There, they farmed and milked cows until 1960 when they moved into New Salem. At that time, Randy began working at the Mandan Hospital as a Labor & Delivery Nurse and was honored to receive the “Nurse of the Year Award”. In 1976 Chester and Randy moved to Mandan and she continued working at the Mandan Hospital. After helping deliver hundreds of babies, each being very special to her, Randy retired in 1994 allowing her to stay home and care for Chester until his death in 2002. In August of 2003 she moved into Library Square in Mandan. Due to failing health, Randy’s final days were spent in the Sanford Care Center off Collins.
Randy loved the spring time when she could plant her flowers, being so proud of the bright colors and the many compliments she would receive regarding her flower gardens. In the winter she loved decorating for Christmas. “The more the better” she always said.
Her greatest pride was her family including her daughters, Debra Held, Bismarck and Becky (Dale) Pletan, New Salem; grandsons; Casey (Monica Reiner) Pletan and Cody Pletan, all of New Salem; great grandsons, Seth and Nathan Pletan; sister-in-law, Doris (Thiel) Held, New Salem; and many special nieces and nephews.
Randy was preceded in death by her parents; husband, Chester; 11 siblings and their spouses; and Chester’s brothers and sisters and their spouses.
To order memorial trees or send flowers to the family in memory of Maranda Held, please visit our flower store.