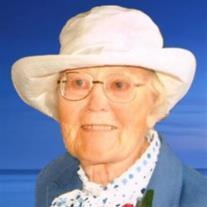 A Memorial Service will be held on Friday, December 5, 2014 at 1:00 pm at Buehler-Larson Funeral Home in Mandan, ND. Visitation will be from 11:30 am until time of services. Burial will take place at Sims Lutheran Cemetery rural Almont, ND at a later date.

Mabel (Feland) Ferguson was born on June 20, 1912, at the family ranch SE of Almont, ND to Otto August & Tilda Elizabeth (Dahl) Feland. She started first grade in the new school in Almont in 1918, attending all grades and graduated from Almont High School in May of 1929. Mabel received her Teaching Certificate from Dickinson Normal School following high school and taught intermediate grades in Almont for several years. She then went back and received her college degree from Dickinson State College in 1936. Following her college graduation, she spent five years teaching English at Almont High School. In August of 1943, Mabel chose to move to the West Coast and settled in Portland, OR working in the shipyard offices. She met and married George Marshall Ferguson on May 13, 1944. George passed away on December 20, 1982. Except for the two years that Mabel missed coming to ND, she came home to Almont every year to spend time with her family and friends.

Mabel was active in attending Loaves & Fishes Senior Center in her Portland community where she made many friends. She was a lady of compassion and knowledge as well as a great source of history to her family. Mabel enjoyed her eleven nieces and nephews and had a great deal of respect and love for each of them.

Mabel moved back to Bismarck in June of 2009 after spending 66 years in Portland, OR. She moved into an apartment in independent living at Primrose Retirement Community and continued to reside there until a fall in January 2014 when she entered Missouri Slope Lutheran Care Center. Mabel loved to walk and did so every day until her fall. She contributed her longevity to her years of walking.

Mabel was preceded in death by her parents; her husband, George; brothers, Olaf Feland, Trygve Feland, Carl Feland, and Arthur Feland; sisters, Anna Feland and Ragnhild Feland; and one niece and her husband, Corma (Feland) and Lyle Reinke.
To order memorial trees or send flowers to the family in memory of Mabel Ferguson, please visit our flower store.