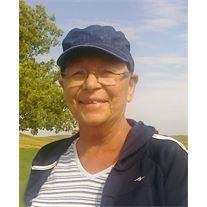 Lynette Hatzenbihler, 66, Center, died November 8, 2011 at St. Alexius Medical Center, Bismarck, after a valiant battle with cancer. Mass of Christian burial will be held at 2:00 pm on Friday, November 11, 2011 at St. Martin Catholic Church, Center, with Reverend Amalraj Roche celebrating. Cremation will take place after the funeral and burial will be held at 1:00 pm on Friday, November 25, 2011 at the Center Community Cemetery. Visitation will be held from 4 to 8 pm on Thursday at St. Martin Catholic Church, Center. A Rosary will be said at 6:45 pm followed by a Parish Vigil. Visitation will continue one hour prior to the service at the church.
Lynette was born September 6, 1945 in Mandan to Iver and Grace (Belden) Dahl. She attended school through the eighth grade at Bonanza #5 near Huff and graduated from Mandan High School in 1963. On October 24, 1964 she married Gerald Hatzenbihler at Huff, where they were both late for their own wedding, but it wasn’t going to start without them! They lived in Center for one year after their marriage, moving to Mandan in 1965 where Lynette was one of the first female meter maids. Always a tomboy who’d rather be outside than inside, Lynette had no fear. She would take on an activity, job, or project whole heartledly. Her passion for the outdoors continued as she loved camping and fishing. She liked to play darts, Texas Hold’em, and she collected piggy figurines. She played harmonica and keyboard by ear and loved jam sessions with friends. While living in Mandan she bartended and worked at the Gourmet House. Moving back to Center in 1974, Lynette helped Gerald farm, worked as a mail carrier, a flag person on construction sites, and cleaned at the coal plant. In 1991 she started as an over the road trucker. Her favorite route was through Phoenix, AZ. Most recently she was the city transit driver in Center for West River Transit until her health declined. She’ll be remembered for all of the hats she wore, always matching her hat and boots to her outfit. Warm and friendly, always willing to lend a hand, Lynette’s memory will be cherished.
Blessed to have shared her life is her husband of 47 years, Gerald Hatzenbihler, Center; three children, Sandra (Patrick) Jones, Wessington Springs, SD, Troy Hatzenbihler (Jodi Hartman), Center, and Jennifer (Paul) Evenson, Sinai, SD; eight grandchildren, Braden, Monica, and Piper Jones, Jericka Hatzenbihler, Landon Hartman, and Shamus, Grace, and Zoe Evenson; five sisters, Mabel (Bernie) Wiesz and Delila (Duane) Bauer, all of Bismarck, Louayne (Peter) Kassian and Karen Scherr (Bill Vogel), all of Mandan, and Judy Dahl (John Wickham), Littleton, CO; one brother, Keith (Vivian) Dahl, Center; sister-in-law, Caroline Dahl, Bismarck; all of Gerald’s extended family; special friends, Al and Stinky Blohm; numerous nieces and nephews; and countless friends.
Lynette was preceded in death by her parents; brother, Leroy Dahl; sister, Jean (David) Fitzgerald; and brother-in-law, Charles Engdahl.
To order memorial trees or send flowers to the family in memory of Lynette Hatzenbihler, please visit our flower store.