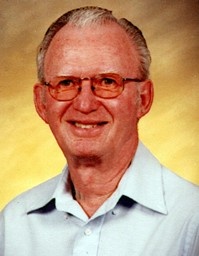 A private funeral service will be held on Wednesday, April 1, 2020 at First Lutheran Church, Mandan, with Pastor Christina Martin officiating.  Burial will follow at the North Dakota Veterans Cemetery.

Lyle Eugene Schulz was born Feb 19, 1930 in New Salem to Carl and Minnie (Johnson) Schulz.  He was raised on a farm north of Judson and graduated from New Salem High School in 1947.  Lyle taught country school until joining the US Air Force in 1951.  He worked at the Occident Elevator, New Salem Motors, and Grube Implement, all in New Salem.  In 1954, Lyle married Jean Gappert in New Salem and they had 3 sons, Bryan, Kevin, and Darwin.  In 1965 they moved to Mandan where Lyle worked at Twin City Implement as parts manager for 27 years until his retirement in 1991.  Lyle also farmed northwest of New Salem.  His hobbies included model trains, coin collecting, wood working, old tractors, fishing, and of course farming.  He was a master of many trades and could fix nearly anything.

Lyle was preceded in death by his parents; his sister, Marian Johnson; and three brothers, Owen, Roland, and Alfred Schulz.

In lieu of flowers, the family prefers memorials to Elm Crest Manor in New Salem or the North Dakota Veterans Cemetery.

To order memorial trees or send flowers to the family in memory of Lyle Schulz, please visit our flower store.
Open