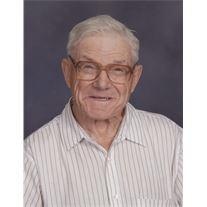 Lyle G. Letzring, 82, New Salem, died with his family by his side on August 28, 2013 at Sanford Health, Bismarck.
A funeral service will be held at 2:00 pm on Monday, September 2, 2013 at St. Paul’s Lutheran Church, Center, with Reverend Dennis Ristvedt officiating. Burial will be at Churchtown Cemetery. Visitation will be held two hours prior to the service at the church on Monday.
Lyle was born on August 24, 1931, the third son to Oscar and Hilda (Tellmann) Letzring. He was raised on the family farm and educated in Oliver County. Lyle was baptized and confirmed at Christ Lutheran Church in Churchtown. In 1957 he went to live with his Uncle and Aunt, Edwin and Eleanor Henke, as a farmhand. Years later he moved to New Salem where he enjoyed his work as maintenance man at Pioneer Manor.
Lyle is survived by one brother, Doug (Sandy) Letzring, Center; nieces and nephews, Sheryl (Curt) Rohweder, Wishek, ND, Brian (Joell) Letzring, New Salem, Jim (Shawnda) Letzring, Gillette, WY, Darin (Tera) Letzring, Pocatello, ID, and Darcee (Jim) Wenning, Beulah; and numerous great nieces and nephews.
Lyle was preceded in death by his parents and two brothers, Oliver and Vernon (Catherine).
To order memorial trees or send flowers to the family in memory of Lyle Letzring, please visit our flower store.