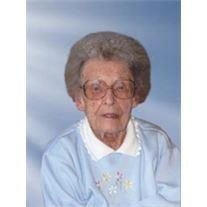 Louise M. Christian, 96, New Salem, died February 5, 2013 at Elm Crest Manor, New Salem.
A funeral service will be held at 2:00 pm on Saturday, February 9, 2013 at Zion Lutheran Church in New Salem with Reverend Russell Fitch officiating. Burial will be at the Churchtown Cemetery. Louise M. Christian, 96, New Salem, died February 5, 2013 at Elm Crest Manor, New Salem.
Visitation will be held from 1 to 2 pm on Friday, February 8, 2013 at Elm Crest Manor, New Salem, and continue from 4-7 pm at Buehler-Larson Funeral Home Chapel in New Salem with a prayer service at 4 pm. Visitation will continue one hour prior to the service at the church on Saturday.
Louise was born April 20, 1916 to Henry and Christina (Liebelt) Scherer on her Grandpa Liebelt’s farmstead near Hazen. When she was a year old her family moved to the Churchtown area where she attended Oliver County Schools through the eighth grade. On January 18, 1935 Louise married August Christian in Mandan and they made their home on the Christian homestead, near New Salem, for 35 years where they raised four children. In 1970 Louise and her husband moved in to New Salem.
Her faith was very important to her, and Louise belonged to Christ Lutheran Church at Churchtown where she served as secretary for many years. When the church closed in 1988, she became a member of Zion Lutheran Church in New Salem where she continued to be very active in areas of the church until her death.
In her spare time, Louise enjoyed making quilts, crocheting afghan’s, and baking. She liked watching television, playing board games and cards, old time music, and traveling. Most of all, Louise loved taking care of her flower gardens and caring for her grandchildren and great grandchildren.
Blessed to have shared her life is one daughter, Ardella (Robert) Schwagler, New Salem; three sons, Loren (Mary) Christian, Marlen (Sheila) Christian, and Randy (Linda) Christian, all of New Salem; 12 grandchildren; 18 great grandchildren; 6 great great grandsons; one brother, Allen (Bernice) Scherer, Bismarck; and two sisters-in-law, Malita Scherer, Hazen, and Lorraine Scherer, Beulah.
Louise was preceded in death by her parents; her husband in 2000; three brothers, Leonard, Raymond (Riha), and Rolland; and two sisters, Irene (John) Bornemann and Esther (Bill) Henke.
To order memorial trees or send flowers to the family in memory of Louise Christian, please visit our flower store.