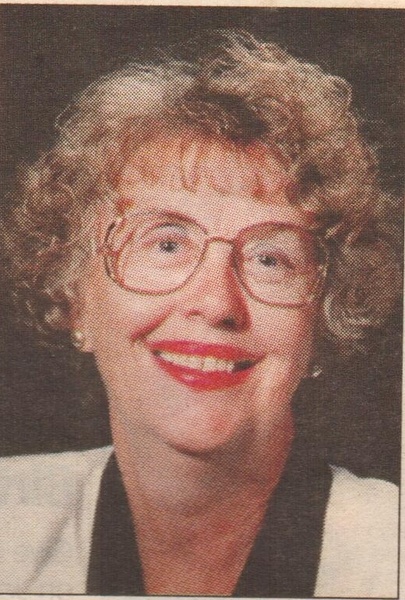 A funeral service will be held at 11 am on Thursday, September 29, 2016 at Redeemer Lutheran Church, Mandan, with Reverend Ryan Wolfe officiating. Burial will be at North Dakota Veterans Cemetery.

Visitation will be held from 5-7 pm on Wednesday, September 28, 2016 at Redeemer Lutheran Church, Mandan, and continue one hour prior to the service at the church on Thursday.

Lorraine was born January 23, 1932 in rural Ashley, ND, the daughter of Frederick and Emma (Nill) Wahl. She was baptized and confirmed in the Lutheran faith. Lorraine graduated from Ashley High School and went to work for the ND Public Service Commission. She later moved to Minneapolis where she was employed by the Army Ordinance Corps. She attended Concordia College in St. Paul studying music and enjoyed participating in Handel's Messiah. Although Lorraine never obtained a degree, she enjoyed her studies of political science at BSC. She was very well read and had a vast vocabulary. Upon returning to ND Lorraine worked for the 1955 Legislative Assembly and later the newly established ND Vocational Rehabilitation office in Bismarck. On November 26, 1955 Lorraine married Harry Moos at Trinity Lutheran Church in Bismarck. They made their home in Mandan where they raised their daughters. Lorraine continued to work for the Legislative Assembly from 1965 through 1995 in various positions, and was involved in taking community and public hearing testimonies. Very outgoing and giving of her time and talents, Lorraine volunteered, was a member of, or worked in many organizations throughout the community. She was the Executive Secretary/Treasurer of Mandan Community Chest (now United Way), the Regional Coordinator for mental health in a ten county area, a Finance Coordinator for the Heartview Foundation Drive, and enjoyed working at the voting site in Mandan during each election. Lorraine worked with Birthright for many years trying to preserve the rights of the unborn, was a board member and president of the former Mandan League of Women Voters and was a past member of Dakota Hosts and International Friendship Force in hosting foreign students, bands, and visitors from other countries. In her retirement, Lorraine continued to be a member of RSVP, Germans from Russia Historical Society, PEO group, was active in the Republican party, active at Redeemer Lutheran Church in Mandan, a member of the former Mandan Hospital Auxiliary (now Sanford Living Center Auxiliary), and was a charter member of Mandan Golden "K" (now Kiwanis). Lorraine and Harry were strong supporters of all Mandan sports, especially Legion baseball, and had a love for Fighting Sioux Hockey. Lorraine also loved golfing at Prairie West and Mandan Municipal golf course.

She had undergone three major brain surgeries throughout her life. With the help of the 23rd Psalm, she survived each and went on to enjoy a full and active life. Lorraine will forever be remembered by those who knew and loved her.

Lorraine was preceded in death by her parents; her husband, Harry, in 2010; three brothers, Walter, Allan, and LeRoy Wahl; two sisters, Erma Wahl and Eunice Groszhans; and two infant brothers.
To order memorial trees or send flowers to the family in memory of Lorraine Moos, please visit our flower store.