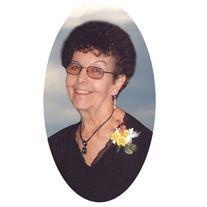 Loretta Lennick, 76, New Salem, died August 4, 2012 at Medcenter One Hospital, Bismarck.
A funeral service will be held at 2:00 pm on Tuesday, August 7, 2012 at Word of Life Church, New Salem, with Reverend Gaylen Lennick officiating. Burial will be at Peace Cemetery, New Salem.
Visitation will be held from 3 to 6 pm on Monday, August 6, 2012 at Word of Life Church and continue one hour prior to the service on Tuesday.
Loretta was born April 28, 1936 in New Salem to Edward and Kathrine (Kessler) Luithle. She attended school through the eighth grade and on October 25, 1953 she married Clarence Lennick in Glen Ullin. They made their home in New Salem and raised two sons. A wonderful wife, mother, and grandmother, she was dedicated to her family and giving of her time and talents. She enjoyed cleaning and worked in custodial services until her passing.
Blessed to have shared her life are her sons and daughters-in-law, Glen (Wanda) Lennick and Gaylen (Koni) Lennick all of New Salem; six grandchildren, Kelsey (Lawton) Backhaus, Lindsey (Lee) Gullickson, McKinsey and Blaisey Lennick, Travis (Kristin) Lennick, and Melanie Lennick; four great grandchildren, Abigail, Paden, and Allison Lennick and baby Gullickson; two sisters, Jillienne Muller, Bismarck and Judy Reinke, Sioux Falls, SD; and one brother, Willard (Darlene) Luithle, Omaha, NE.
Loretta was preceded in death by her parents; her husband Clarence, on January 29, 2004; and a brother, LeRoy Luithle.
To order memorial trees or send flowers to the family in memory of Loretta Lennick, please visit our flower store.