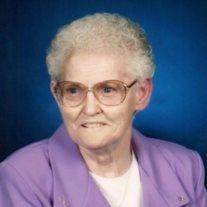 A funeral service will be held at 10:30 am on Friday, October 10, 2014 at Messiah Lutheran Church, Mandan, with Reverend Mark Drews officiating. Burial will be at Zion Cemetery in New Salem.

Visitation will be held from 6 to 8 pm on Thursday, October 9, 2014 at Buehler-Larson Funeral Home, Mandan, and continue one hour prior to the service at the church on Friday.

Loretta was born July 5, 1937 in Mott, ND to Theodore and Catherine (Lindemann) Schaff. She attended rural school through the eighth grade in Steiner Township in Hettinger County. Loretta graduated from St. Mary’s Central High School in Bismarck. On June 18, 1958 she married Vernon Kroh in Mott, ND and they had three sons, Curt, Kenny, and James. Their family lived in Ft. Lewis, WA where Vernon served in the US Army. In the fall of 1960 they moved to New Salem. On December 22, 1978 Loretta married Michael Cantlon in New Salem and from this union came three adopted children, Michael, Gina, and Jackie. Loretta lived in New Salem until 1997 when she moved to Liberty Heights in Mandan. Loretta taught Sunday school at Zion Lutheran Church in New Salem and was active in the Ladies Aide. She was also a member of the Homemakers Club of New Salem. Talented in the kitchen, she enjoyed baking, cooking, and canning.

Loretta was preceded in death by her parents; two sons, Kenneth and James; brother, Jerome Schaff; sister, Mary Weidenmeyer; and infant sister, Rufina.
To order memorial trees or send flowers to the family in memory of Loretta Cantlon, please visit our flower store.