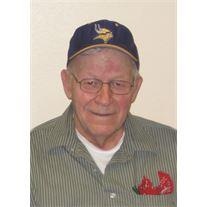 Lorence Bornemann, 81, Center, died July 27, 2012 at Elm Crest Manor, New Salem.
A funeral service will be held at 10:30 am on Friday, August 3, 2012 at St. Peter’s Lutheran Church, Hannover. Burial will be at St. Peter’s Cemetery, Hannover.
Visitation will be held from 4 to 8 pm on Thursday, August 2 at St. Peter’s Church with a prayer service at 3:30 pm, and continue one hour prior to the service on Friday.
Lorence was born at home on the farm on May 11, 1931 to Henry and Emma (Hintz) Bornemann. He attended parochial school in Hannover, ND through the eighth grade. On June 22, 1953 he married Shirley Kalweit in Churchtown. They made their home two miles west and two miles north of Center where they farmed until 1988. During that time they milked cows, and raised cattle, pigs, chickens, ducks, rabbits and horses. He also broke horses. Lorence lived on the farm until 2003. After his retirement from farming he was a night watchman at BNI Coal. Shirley died on February 12, 2003.
Lorence’s main interest was farming, but he also enjoyed going to cattle auctions, farm auction sales, the Medora musicals, rodeos, tractor pulls, fairs, Old Settlers, and family reunions (especially to play horseshoes). He also enjoyed playing cards and pool as well as listening to country music. In his later years, he enjoyed watching baseball on TV, going to the casino, picnics, and going for drives through farming country. He could fix anything. His religion was very important to him and Lorence attended devotions each day. He was involved in the Center school board and was treasurer at St. Peter’s Lutheran Church in Hannover where he was a lifetime member.
He truly loved being around his entire family including his daughter, Anita Bornemann, Seattle, WA and son and daughter-in-law, Rod and Pam Bornemann, Plymouth, MN; his grandchildren, Cole and Tasha Bornemann, Plymouth, MN; four sisters, Norma Beckman, Hannover, Verna Reuther, Bismarck, Elaine Yeager, Beulah, and Esther Bornemann, Beulah; two brothers, Earl (Marilyn), Mandan and Martin (Verna), Center; and numerous nieces and nephews.
Lorence was preceded in death by his wife; parents; and brothers-in-law, Preston Beckman, Norman Yeager, and Herbert Reuther.
To order memorial trees or send flowers to the family in memory of Lorence Bornemann, please visit our flower store.