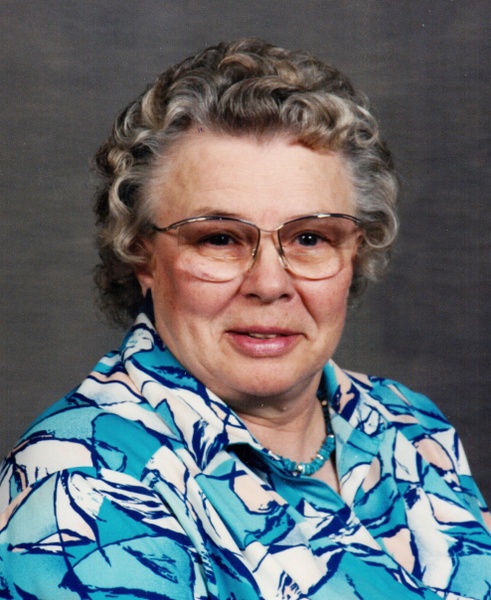 A funeral service will be held at 10:30 am on Saturday, June 10, 2017 at Messiah Lutheran Church, Mandan, with Rev. Lester Wolfgram officiating. Burial will be at Graceland Cemetery in New Salem. Visitation will be held one hour prior to the service at the church on Saturday.

Olinda Dorothea Holze was born on the family farm near Youngtown, ND on July 1, 1923, the second of five children to Gustav and Wilhelmina (Altenburg) Holze. She was a faithful member of many Missouri Synod Lutheran Churches throughout her life and helped maintain and sustain numerous congregations, including some in Caracas, Venezuela.

Linda had wanderlust, a strong desire to travel and explore the world, and moved to Seattle, WA during WWII to work at Boeing Aircraft. While in Seattle she married Elwood Baldwin. After the war she lived in Grayling, MI and then Tulsa, OK. Linda, Elwood, and their two children moved to Caracas, Venezuela and then returned to Oklahoma. In 1964 they lived in Djakarta, Indonesia and again returned to Oklahoma. Divorced in 1968 in Redondo Beach, CA, Linda became a sales clerk at Sears catalog store, and many of her customers called her Mrs. Sears. She then became secretary and coordinator of the Sears Custom Made Drapery Dept. at Redondo. Retiring from sears in 1991, she moved back to North Dakota. While in Mandan, she lived at Liberty Heights and Sunset Drive Continuing Care Center. Linda was a bowling trophy winner and a 300 score was sometimes earned. Active in church, she was a Sunday school teacher, member of several choirs, chief cook and bottle washer, and sometimes secretary. Linda loved to dance, especially ballroom dancing and was often seen stealing the show at the "Starlight Ballroom" in Redondo Beach, CA. Everywhere she went, Linda made friends who invited her to play a variety of card games. An active volunteer, she played cards and visited at the Veterans Home in Glendive, MT, was a ruby volunteer at the Glendive Community Hospital, and participated in the Seniors in Glendive, and Golden Age Club in Mandan. As a seamstress and an avid quilter, Linda's quilts have been donated to causes across the globe.

Linda was preceded in death by her parents; her brother, Milton Holze; sister, Lorraine Massad, and an infant grandson, Aaron Robinson.

Memorials are preferred to the Alzheimer's Association. Linda's Memorial Folder
To order memorial trees or send flowers to the family in memory of Linda Baldwin, please visit our flower store.