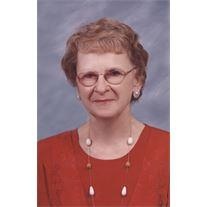 Leone Wanner, 80, Mandan, died March 16, 2012 at Medcenter One Hospital, Bismarck.
A funeral service will be held at 10:30 am on Friday, March 23, 2012 at Faith Lutheran Church, Bismarck, with Reverend Rebecca Aardahl officiating. Burial will be at the North Dakota Veterans Cemetery.
Visitation will be from 6-8 pm on Thursday, March 22, 2012 at Buehler-Larson Funeral Home, Mandan, and continue one hour prior to the service at the church on Friday.
Leone was born May 11, 1931 in Persian Lake, ND to Reinhold and Anna (Fercho) Renschler. She attended school through the eighth grade. Her family lived in Sterling, south of Driscoll, and on a farm northwest of Steele. In 1950 she met Allen Wanner and they were married on December 30, 1956 in Medina and then moved to Mandan. In 1963 they built a brick house that they were still living in. Leone worked for Cloverdale for 38 years. She was a great cook, especially German foods, and was a meticulous housekeeper. She enjoyed walking, traveling, socializing, have coffee with friends, and loved to reminisce about the past. Leone had a fondness for animals, especially birds and dogs. She enjoyed going to the Elks, Eagles, and American Legion. Above all, Leone will be remembered as a beloved wife, mother, and grandmother. Nothing pleased her more than just being near her husband, Allen. Her devotion to her only son, Mark, her pride and joy, and love for her grandchildren will not be forgotten.
Blessed to have shared her life is her husband of 55 years, Allen Wanner, Mandan; her beloved son and daughter-in-law, Mark and Valarie Wanner, Bismarck; her two grandchildren, Serena and Damon Wanner; and two sisters-in-law, Susy Renschler and Helen Renschler.
Leone was preceded in death by her parents; an infant daughter, Joany Marie; two infant brothers, Kenneth and Harold; two brothers, Raymond and Leo; and one sister, Goldie (Emmett) Young.
To order memorial trees or send flowers to the family in memory of Leone Wanner, please visit our flower store.