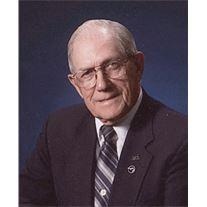 Leonard Crouse Jr., 82, Mandan, died peacefully at home on October 11, 2012.
A funeral service will be held at 11:00 am on Monday, October 15, 2012 at First Lutheran Church Mandan, with Reverend Jack Carlson officiating and Reverend Richard Hagestuen sharing the sermon. Burial will be at the North Dakota Veterans Cemetery with full military honors.
Visitation will be held from 5 to 8 pm on Sunday, October 14, 2012 at Buehler-Larson Funeral Home, Mandan, and the family asks for friends to share stories and their memories of Leonard. Visitation will continue one hour prior to the service at the church on Monday.
Leonard Jr. was born June 9, 1930 in Steele, ND to Leonard Sr. and Emma (Ebele) Crouse. He was raised and educated in Jamestown. At age 15 he started working for the Northern Pacific Railroad. On January 16, 1951 Leonard enlisted in the US Army, spending a year in Alabama. He served for 9 months with the 17th Infantry Regiment in Korea. Leonard was proud to receive the Korean Service Medal with one Bronze Service Star, the Combat Infantryman Badge, and the United Nations Service Medal. He was honorably discharged as a Master Sergeant in 1952.
On December 3, 1949 Leonard married Hazel Newcomb of Minnewauken. They made their home in Jamestown. Moving to Mandan in 1962, Leonard worked for Burlington Northern Railroad as a car-man, retiring in 1992 after 46 years of service. Following their retirements, Leonard and Hazel enjoyed diet coke and fellowship each day at the McDonalds restaurant in Mandan. He enjoyed singing Happy Birthday to the employees on their special day, which will be missed. After Hazel’s passing, Leonard and his dear friend, Delores, continued the daily routine of McDonalds visits. Leonard was active in his church teaching Sunday school, singing in the church choir, and as a funeral usher. He was a 50 year member of the American Legion and was especially proud of his military service. The last 47 years of his life were dedicated to sobriety and attending his AA meetings without fail. Leonard loved all sports and enjoyed watching his family and grandchildren participate. Leonard was a stranger to no one and a friend to many. His passing leaves lasting memories of love, laughter, and many shared stories.
Blessed to have shared his life are his three children, Bonnie (Richard) Tentis, Thomas (Debra) Crouse, and Ronald (Lynn) Crouse, all of Mandan; daughter-in-law, RaeAnn (George) Kirick, Hazen; his special friend, Dolores Rowe, Mandan, and her extended family; 11 grandchildren, Leonard (Leah) Crouse IV, Casey Crouse, Michael (Shanna) Crouse, James (Kelli) Crouse, Karlee (Edwin) Dirck, Jay (Erna) Crouse, Ryan Crouse, Steven (Jori) Tentis, Daniel (Leaha) Tentis, Sarah (Robert) Baker, and Heather Tentis; 18 great grandchildren; two sisters, Darlene (Curtiss) Goehner, Jamestown and Virginia Reich, Mandan; and one brother, Gary (Lorraine) Crouse, Fargo.
Leonard was preceded in death by his wife, Hazel, on June 2, 2009; son, Leonard Crouse III; his parents; brother, Donald (Marion) Crouse; and brother-in-law, Roger Reich.
To order memorial trees or send flowers to the family in memory of Leonard Crouse, please visit our flower store.