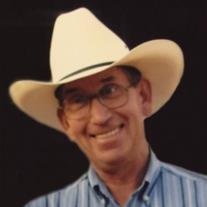 A funeral service will be held at 10 am on Wednesday, February 18, 2015 at Buehler-Larson Funeral Home, Mandan, with Reverend Lee Herberg officiating. Visitation will be held one hour prior to the service at the funeral home.

Lee was born February 26, 1951 in Mandan to Edward and Thelma (Berg) Orgaard. Raised on the family farm near Center, he attended rural schools and graduated from New Salem High School in 1969. He enlisted in the US Navy and upon his father's death in 1971, was discharged to return home and took over the family farm, raising horses and Simmental cattle. On October 26, 1973 Lee married his beloved Sandra Friesz. Farming was life for Lee and he felt closest to God when standing on his prairie hills. He enjoyed genealogy and spent many hours researching his family. Lee loved family gatherings and his granddaughter, Evelyn, was his greatest pride and joy.

Memorials are preferred to the ND Heritage Center.
To order memorial trees or send flowers to the family in memory of Lee Orgaard, please visit our flower store.