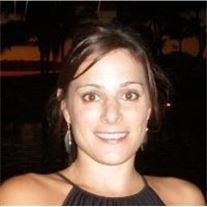 Kylee Ann (Heid) Elovitz, 36, Phoenix, AZ, formerly of New Salem, passed away on May 10, 2012 in Phoenix. She was out on her daily run while pushing her son in his stroller when she suddenly collapsed, and efforts to revive her were unsuccessful. The medical examiner has not yet determined the cause of her death.
A Mass celebrating Kylee’s life will be held at 10:30 am on Wednesday, May 16, 2012 at St. Pius V Catholic Church, New Salem, with Reverend Amalraj Roche celebrating. Burial will be at St. Pius Catholic Cemetery following the service.
The family will be receiving friends one hour prior to the service at the church.
Kylee was born August 25, 1975 in Bismarck to Ron and Sandy (Sturn) Heid. She graduated as an honor student from New Salem High School in 1994. Kylee was active in cheerleading, track, and basketball. She attended North Dakota State University and Mary College, graduating with a degree in Occupational Therapy in 1999. In 2000 Kylee moved to Arizona where she worked for several school districts before starting her own occupational therapy company. One of Kylee’s passions was running and she competed in several marathons, including the Boston Marathon in 2008. Her greatest pride was being a mother and she was an active member of the Ahwatukee Mom’s Club.
Jonathan Elovitz proposed to Kylee in the flower fields of Carlsbad, CA and they were married in Carlsbad on September 6, 2009. They lived in Phoenix, where their son, Dylan, was born on December 2, 2010. Kylee was a devoted wife and mother, a loving daughter, an admired auntie, and a cherished sister. She was adored by family and friends and will be deeply missed by all who knew and loved her.
Blessed to have shared her life is her husband, Jonathan and son, Dylan, Phoenix, AZ; her parents, Ron and Sandy Heid, New Salem; sister, Heather (Tim) Nelsen, Bemidji, MN; brother, Dan (Lane) Heid, Dickinson; nieces, Lindsey and Taylor Nelsen; grandmother, Margaret Sturn, New Salem; Jonathan’s family: her father and mother-in-law, Michael and Judi Elovitz; brothers-in-law, David (Jenn) and their children, Jessie and Ben; Adam (Dawn) and their children, Zac and Sydney; sister-in-law, Anna (Josh) and their children, Jayden, Chloe, and Jordan, all of CA; numerous aunts, uncles, and cousins; and countless friends.
Kylee was preceded in death by her grandparents, William and Elsie Heid and George Sturn; and uncles, Oliver Fuchs, Wilbert Heid, and Ben Kottsick.
To order memorial trees or send flowers to the family in memory of Kylee Elovitz, please visit our flower store.