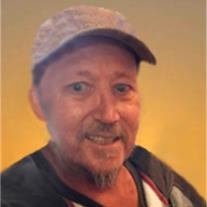 Cremation has taken place and a Memorial Service will be held at 10:30 am on Tuesday, February 9, 2016 at Buehler-Larson Funeral Home, Mandan. Burial will be at Mandan Union Cemetery next to his brother, Virgil.

Kevin was born December 28, 1962 in Sheridan, WY to James and Shirley (Schmidt) Peterson. When he was two weeks old his family moved to Mandan where he later attended Mandan High School. In 1988 he married Jacki Charnholm and together they had two children, Michael and Brittany. Kevin started his own business, Peterson Lawn Spraying, in 1997. He continued to grow the business and also did lawn care. His son, Michael, helped him and later took over ownership of the family business.

Kevin enjoyed spending time with his two children and wife. He enjoyed being outdoors-hunting, fishing, and adventures with his children. Kevin loved fast cars and riding motorcycle. He was recently blessed with two grandchildren, Nolan Lee and Klayten Michael, who he absolutely adored.

Kevin was preceded in death by his parents and brother, Virgil.
To order memorial trees or send flowers to the family in memory of Kevin Peterson, please visit our flower store.