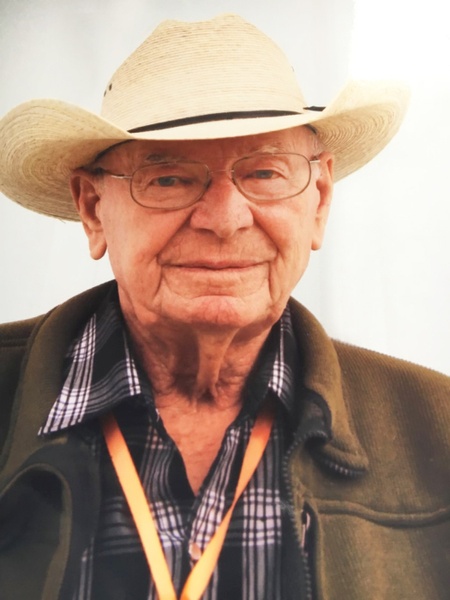 A funeral service will be held at 10:30 AM on Monday, November 8, 2021, at Peace Church, New Salem, with Rev. Joshua Eddy officiating.  Cremation has taken place and the family will greet friends one hour prior to the service at the church on Monday.

The Schulz family team and wagon will take him to his final resting place at Peace Cemetery following the service.

Kenny was born August 25, 1927, in New Salem to George and Bertha (Rabe) Schulz.  He attended school through the eighth grade and then began working to help support his family.  He broke horses for extra income which led to a lifelong love of horses.  While working in the field one day in the mid 1940’s, Kenny noticed a car driving by and the young lady inside had caught her skirt in the door, and it flapped in the wind.  He decided then and there he’d marry that girl.  On November 15, 1948, Kenny married Frances Gaebe and they lived with her family in New Salem.  Kenny worked at Farmers Union and they sent him to refrigeration school in Albert Lea, MN.  He then installed refrigeration and milking systems through Morton and Oliver County.  Kenny and Frances farmed and ran their own dairy operation while he continued installing milking systems throughout the area.  They retired from milking in 1969.  Kenny farmed, and also hauled milk, later buying Walter Henke’s truck and route.  Kenny retired from his milk route when he was 70 years old.  He then worked as an inspector and field operator for Missouri West Water System for 10 years, finally retiring for good at age 80.

Kenny gave much of his life, time, and talents to the community of New Salem.  He helped pour the foundation for Peace Church and served on the council for many years and was the sexton of Peace Cemetery.  Kenny was a charter member of the New Salem Rodeo Board, North Dakota Rodeo Association, New Salem Weigh Station, Saddle Club, Merchant Association, and was active with the Morton County Fair Board for many years.  He was also a volunteer fireman.  Kenny helped start the West River Teamsters Wagon Train and helped build the original 4-H camp in Washburn.

Kenny loved wagon train trips with his family, especially when he took the grandkids along and they slept under the stars.  Picnic lunches in the pasture or farmyard were frequent and always special.  Kenny and Francis enjoyed traveling to Waverly, Iowa for horse sales and also to fair association conventions.

Above all, Kenny loved his family unconditionally.  He instilled a strong work ethic in his children and grandchildren, showing them each how to work hard and also to enjoy life and have fun.  A true cowboy, talented horseman, steward of the land, generous community member, and beloved family man, Kenny will be missed by all who knew and loved him.

To order memorial trees or send flowers to the family in memory of Kenny Schulz, please visit our flower store.
Open