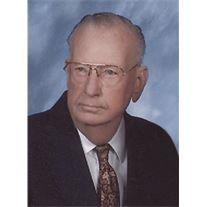 Kenneth Roy Porsborg, 87, passed away peacefully in his sleep on August 24, 2012 at his home in Mandan.
A funeral service will be held at 11:00 a.m. Tuesday, August 28, 2012 at First Lutheran Church, Mandan, with Reverend Lee Herberg officiating. Burial will follow at the North Dakota Veteran’s Cemetery with full military honors.
Visitation will be held from 4:00 to 8:00 p.m. on Monday, August 27, 2012 at Buehler-Larson Funeral Home, Mandan, with a prayer service at 7:00 p.m. Visitation will continue one hour prior to the service at the church on Tuesday.
Kenneth was born on January 8, 1925 near Center to Nels and Dora (Hagerott) Porsborg. He went to high school in Center, graduating at 17, when he was drafted into the Army. Kenneth served in the Pacific Theater during World War II. On October 25, 1944, he was seriously wounded at the Battle of Leyte Gulf in the Philippines, and spent over 7 months in military hospitals recuperating from his wounds. Kenneth was a very proud recipient of the Purple Heart. Upon his discharge, Kenneth returned to Center where he taught for a time at a country school. In 1947, he started a taxi business in Mandan with his friend-for-life Ray Price, who preceded him in death by less than three weeks.
On September 10, 1950, Ken married Darlene Schwinkendorf at the First United Methodist Church in Mandan. She was with him when he died, and in his last hours, he showed his eternal love by reaching for her hand.
Ken worked as a car salesman at Western Auto (later Remund Ford) until 1957 when he and a partner started OK Equipment, a truck body and school bus dealership in Mandan. In 1965, he purchased the Love Dairy Farm north of Mandan and eventually developed that property into what is now the Mandan Industrial Park and several residential subdivisions. In the early 1970’s Kenneth sold OK Equipment to his brother Myron, and went back to his first love, farming. He operated a cattle ranch in Oliver County until the mid-1980’s when he finally retired.
Ken’s family will always remember his gentle and generous spirit. He was also a vibrant, dynamic personality and wonderful conversationalist who developed many close friendships over the years. He took great joy in the traveling he and Darlene did in retirement, often with Johnny and Carolyn Schneider of Mandan whom they both adored. He also enjoyed his hunting and fishing excursions with his buddies, son and grandsons.
Kenneth was a member of the DAV, American Legion, Elks and Eagles. He served his community in many ways, including on the boards of directors of First National Bank of Mandan (later Norwest), Heartview and the Chamber Ambassador’s Club.
Kenneth is survived by his wife of nearly 62 years, Darlene; his daughters, Patti Maher, Mandan, Debbie (Rod) Potts, Richardton, and Diana (Jess) Nelson, Mandan; his son, Scott (Julie), Mandan; his grandchildren, Angela Maher, Fargo, Leah Wohlsdorf, Guatemala, Kent Schlosser, Helena, MT, Gina Wohlsdorf, Charlottesville, VA, Kara Schlosser, Minneapolis, and Nicholas Porsborg, Mandan; his great grandson, Owen Kenneth Wald, Fargo; his sisters, Helen Tracy, Bismarck and Marilyn (Gary) Litt, Moorhead; a sister-in-law Rose Marie (Helbling) Porsborg, Mandan; and numerous nieces and nephews.
He was preceded in death by his parents; his brothers, Lawrence and Myron; and countless close friends, the passing of each he mourned deeply.
To order memorial trees or send flowers to the family in memory of Kenneth Porsborg, please visit our flower store.