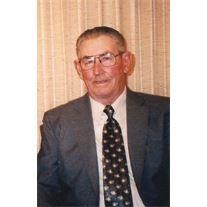 ­­­Kenneth Frederick Kaelberer, 85, New Salem, died peacefully with family members by his side on March 10, 2013 at Elm Crest Manor, New Salem.
A funeral service will be held at 2:00 pm on Wednesday, March 13, 2013 at Salem United Church of Christ, New Salem, with Pastor Ron Hildahl officiating. Burial will be at Bethel Cemetery, south of New Salem, at 4 pm.
Visitation will be held from 4 to 7 pm on Tuesday, March 12, 2013 at the Buehler-Larson Funeral Chapel, New Salem, with a prayer service at 7:00 pm. Visitation will continue one hour prior to the service at the church on Wednesday. Lunch will be served at the New Salem Fair Grounds following the funeral service.
Kenneth was born September 25, 1927, the son of Fritz and Wilma (Meier) Kaelberer. He attended New Salem Country and Public Schools. On October 24, 1952 he married Glenda Norton in New Salem and was the fourth generation farmer on the Otto Meier farm three miles south of New Salem. Farming and a love of the land were Kenneth’s passions. He and his brother, Delbert, took over the operations of the Kaelberer Coal Mine, south of New Salem. Kenneth’s love of mining and earth moving was passed on to him from his father who worked closely with them in the coal mine. In 1971, Kenneth owned and operated Ken-Del Construction with Delbert. Together they would strive to maintain soil conservation efforts and landscaping projects in the area.
Kenny was a community-minded man with a great deal of integrity. He would never miss an opportunity for a handshake. He was a lifelong member of Bethel United Church of Christ and when it closed, he became a member of the Salem United Church of Christ. While at Bethel, he served on the Consistory Board as president and treasurer, as well as singing in the church choir. Kenny had many community service accomplishments, including serving on the Credit Union Board of Directors and the Credit Committee for a total of 21 years, Board of Directors for Farmers Union Oil for 21 years including the Morton Oliver Transport Board of Directors. He was also a member of the New Salem Weigh Station, Land Improvement Contractors Association, and the North Dakota Centennial Tree Farmer Program for many years.
Grateful for having shared his life are his wife of 60 years, Glenda Kaelberer, New Salem; son, Claye (Michelle) Kaelberer, New Salem; daughter, Merry Hoff, Hopkinsville, KY; seven grandchildren, DeEll (Russ) Jordre, Dustin (Jenna) Hoff, Delton Hoff, Danelle Hoff, Lindsey (Austin) John, Brittany (David) Rau, and Conner Kaelberer; one great grandchild, Riley John; sisters-in-law, Marlene Bethke and Irene Kaelberer; brother-in-law, Myron (Mabel) Norton; and many nephews and nieces.
He was preceded in death by his parents; brother, Delbert; brother-in-law, Roger Bethke; and niece, Kim (Bethke) Bittermann.
To order memorial trees or send flowers to the family in memory of Kenneth Kaelberer, please visit our flower store.