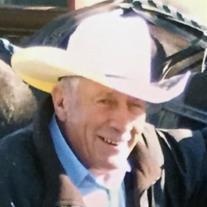 A funeral service will be held at 10:30 am on Wednesday, April 29, 2015 at St. Peter Lutheran Church, Hannover, with Reverend Russell Fitch officiating. Burial will be at Hannover Cemetery. Visitation will be held from 1-2 pm on Tuesday, April 28, 2015 at Elm Crest Manor, New Salem, and continue from 5-7 pm at St. Peter Lutheran Church in Hannover and one hour prior to the service at the church on Wednesday.

Kenneth Earl, “Kenny” was born January 4, 1929 in Bismarck to Henry and Bertha (Gieseke) Henke. According to family lore, in 1931 at two years of age, Kenny first developed pneumonia which was typically fatal since penicillin was yet to be developed. His older brother Lester, then 22 and engaged to be married, prayed God would spare Kenny and offered himself instead. God answered that prayer, granting Kenny 84 more years of life but a life without ever knowing his older brother Lester who died later that same year from pneumonia! Kenny’s hope and expectation was to one day meet Jesus and Lester in heaven.

Kenny lived those years fully and with gratitude knowing full well that his life did not come cheaply. He was raised on the farm homesteaded by his father northeast of Hannover where he developed his love for family, friends and, of course, horses. However, in 1945 he met his greater love, Audrey Hoger, gladly selling his horse in order to purchase a diamond engagement ring! Kenny and Audrey were married on June 16, 1949 and they made their home on the family farm where they spent their lives together farming, milking cows, raising their five children, and actively participating in their church and community. Kenny and Audrey sang beautifully together for many weddings, sang in the church choir, were leaders in 4-H, and held numerous offices within St. Peter Lutheran Church where he was a member his entire life. In addition to farming, Kenny was a talented carpenter, auctioneer, and horsemen. His passion for horses led him on countless trail rides, a wagon train with the Girls Scouts of America in 1991, President Clinton’s inaugural parade in 1993, and the Pony Express to Cheyenne, WY carrying an original mail pouch in 1994. He was a member of the US Marshal Posse and the West River Teamsters. In 2010 he wrote of his memories and experiences in his short book “70 Years of Horsing Around.” Kenny was Chairman of the Oliver County Centennial Committee in 1985 and the St. Peter Lutheran Church Centennial Committee in 1989. He was a fun loving people person who derived much joy and pleasure in simple things like telling jokes, stacking his pinochle hand when no one was looking, and a good old fashion water fight!

Kenny suffered from Congestive Heart Failure and Chronic Obstructive Pulmonary Disease. During the past year he suffered numerous bouts of pneumonia greatly weakening his condition.

Kenny was preceded in death by his parents Henry and Bertha, and siblings; Alfred, Melinda, Lester, Hulda, infant Mildred, and Keith.

In lieu of flowers, memorials will be distributed as Kenny wished.
To order memorial trees or send flowers to the family in memory of Kenneth Henke, please visit our flower store.